Time to catch up on where we’ve been. After leaving Badlands we had to find a spot to hide out for Labor Day. It needed to be a place that doesn’t take reservations, since we didn’t make any, and it needed to be somewhat along our route to Kansas so either we needed to go further east in South Dakota or south into Nebraska. So Chuck searched and searched and realized that there’s not much that met our criteria. We finally found an Army Corps of Engineers park on the Missouri River that didn’t look too bad. It got us further east and then we could head due south from there.

The park was called Left Tailrace Campground and it sat on an island beneath the Big Bend Dam. It was mostly a boater’s campground. I counted 6 boat ramps on different sides of the dam there. Almost everyone was towing a fifth wheel trailer with a boat trailer hooked up behind that. Looked way too long and hard to maneuver! The sites were nicely spaced and some had great views of the river, but we opted for one that was a little further back from the windy point of the island. It was still very windy and the worst part of it was that the wind didn’t seem to chase off the bugs. Anytime we opened a window or vent tiny gnats came in right through the screens. We quickly found that we had to keep everything closed tight and run the AC. Since we had electric hook-ups that wasn’t a problem. Our handy Dyson stick vac was soon turned into a bug sucker. One night there were warnings for violent storms, and while we did get some strong gusts with lots of lighting and rain, we were spared the large hail and 100 mph straight line winds that hit other areas of SD.

We spent a week here to wait out the Labor Day crowds. With the so-so weather the campground never did fill up. We found a great laundromat in tiny, nearby Chamberlain and checked off that bi-weekly chore.

One day we drove an hour up to the state capital, Pierre (they pronounce it pier). We went to the farmer’s market (all 4 stands worth), walked around the beautiful capitol building (they bought the plans from Montana for $15), had delicious BBQ pork at a popular diner (thanks Yelp), washed the truck, and stopped at Walmart for a few supplies. That about exhausted the things to do in Pierre and we drove back through the fields of grass and cows to the campground.

Other than that we enjoyed good internet and keeping up with the news on the local tv station. Big things here in Keloland were the storms and a small plane that crashed in a cornfield. No one could figure out why, but I thought it obvious that the gusty winds must have played a part. In fact it was so windy we could barely ride our bikes and at times even walking was a challenge. Chuck says it’s getting me ready for Kansas where the wind never stops blowing.

Since we couldn’t find anything in Nebraska to our liking we drove straight through to a park just across the Kansas border. Lovewell State Park turned out to be a confusing maze of campgrounds with a pricing scheme that boggled the mind. You could “primitive” camp by pulling off into the grass along the lake, or get sites with just electric, electric and water, or full hook-ups each at a different price in the different campgrounds. Some sites were considered “prime” and that made them another price. We couldn’t quite figure out what made a site prime, as some of them were small sites with no views while others were full hookup sites with views through the trees to the lake. We were tired and had a hard time figuring it out by the time we arrived. We finally settled on a primitive site right along the lake. It had no-hookups, but it was lakeside with an awesome view of the sunset. 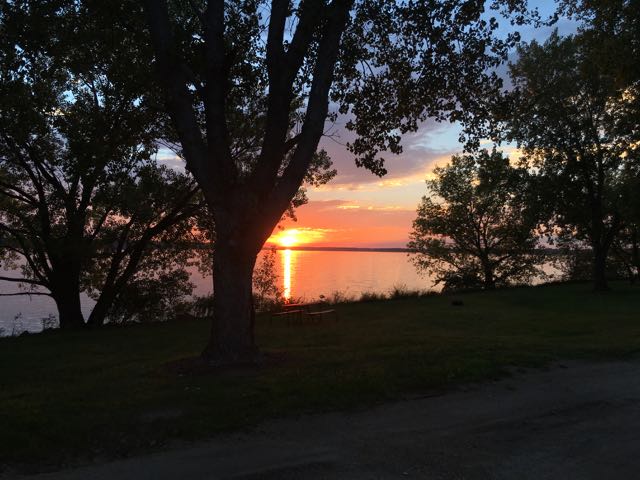 It was very humid, but there was a strong breeze so we figured we’d be alright. After a less than restful night we decided that moving to an electric site so we could run the AC all we wanted would help, especially since the humidity was slated to return to 90% each night. So we gave up our great view for a site with a partial view in one of the developed loops. It was just us and the campground host, nice and quiet. This is what we have to look forward to camping mid-week in the off-season.

Again, there was not much to do in the area but it was a huge park so we rode our bikes through all the different campgrounds and picnic areas every day. Other than that we watched Star Trek in honor of the anniversary, drove back into Nebraska to the nearest grocery store to get supplies and relaxed before we needed to move on.

Side note: Do not try to buy fresh chicken in “beef” country. In the smaller stores all you can find is frozen chicken if you’re lucky and you can totally forget about organic. If they have organic vegetables they are so old and sorry looking that they aren’t worth it. We’re learning to be flexible and take what we can get. 🙂