So it’s not always colorful sunsets and no worries. On our way out of Wichita the “check engine” light came on in our brand new truck. We tried stopping to re-screw the gas cap, a usual suspect in these cases, but that didn’t help. Since the temp and oil pressure and everything else was reading fine we kept going, but once we got settled at Lake Meredith we called the Chevy Dealer in Amarillo and they graciously got us an appointment the next day.

So instead of a lazy morning we had to get moving for the 45 minute drive into town. The service people at Auto Nation couldn’t be nicer, but still it wasn’t much fun to sit around the dealership while they did some sleuthing. Turned out the ambient air temperature sensor which is inside the passenger side mirror needed replaced. They had to order the part so we left it there (they had the mirror all in pieces) and drove a loaner back to the campground. Again the next morning we were up for the drive back into town to pick up our truck. This time we took advantage of being in town to visit a few places.

We had to make a stop at the famous Cadillac Ranch. A local billionaire commissioned this piece of pop artwork consisting of 10 Cadillacs, models from 1949 through 1963, sunk nose down into a field. The public is invited to add to the artwork by spray painting on the cars. Of course we had to leave our mark! 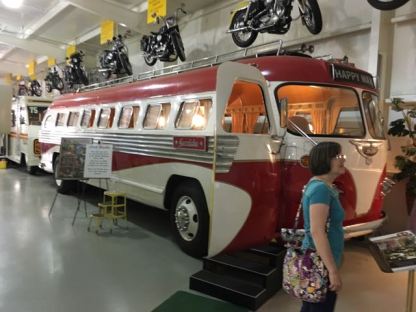 Although we aren’t much for museums, we found the RV museum housed inside a local RV dealership interesting. To our surprise they have the Gornicke bus (if you don’t know what this is watch Robin Williams in the movie RV) which we got to walk right in. In fact you could walk into most of the trailers. They had been restored or if possible left in their original condition. We found several old Airstreams, an original version of a tent trailer, a Winnebago motorhome similar to the one my family had in the 70s, a few old cars, motorcycles, and even an old Cris Craft boat. It was free and worth the stop. 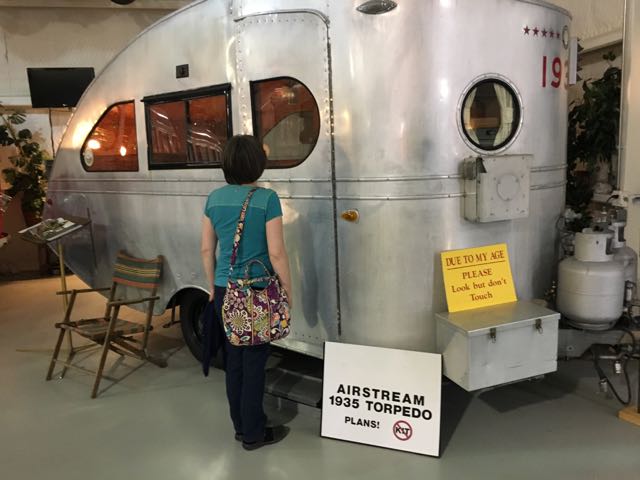 We enjoyed lunch at a popular local spot, Jason’s Deli. Imagine a hometown version of Panera, only better quality with all kinds of sandwiches and salads. They even had a great salad bar (when was the last time you saw one of those). Plus free mini muffins and swirly cones, help yourself! No wonder the place was packed.

On the way back to the campground we decided to stop in the nearby town of Fritch and wash the bugs off the truck. We pulled into the do-it-yourself car wash and as we’re trying to rinse the truck Chuck noticed that his hands were getting black from the spray hose and that it’s rubbed all on his pants and then we notice we’re leaving black footprints everywhere. The owner comes driving up and tells us she was just going to close down this bay because she caught some workers from the carbon black plant washing their equipment there. She felt so bad and gave us our money back. We went to another car wash in town and re-washed the truck, but didn’t realize the extent of the mess. Apparently carbon black is hard to get rid of and it was caked into the treads of our shoes. So once we got back to the campground we were cleaning the floor mats (thank goodness they’re rubber and not carpet), our shoes, the trailer floor (we took our shoes off, but it was on our socks and feet). After going through lots of rags (thank goodness I kept a big bag of them) and a tube of Goop we got most of it, but I ended up throwing out my flip-flops because they were never going to come clean. 😦

The next day the engine light came back on. Of course it was the weekend, but luckily our next stop, Palo Duro Canyon, was just south of Amarillo so we decided to move on and call the service center on Monday. It had been windy most days at Lake Meredith and the day we left was no different. Apparently wind is common here. Thank goodness for the new truck with it’s improved control. With the old truck we might have had to wait it out, but the 20-25 mph winds were no problem for our new truck and aerodynamic Airstream. Or so we thought…

Once we got to the campground we noticed the skylight shade blowing from the wind even though we had all the windows closed. Opening the shade, we saw nothing but blue sky. Yep, that’s right our skylight must had blown off during the drive. The frame was still fine, but the plastic cover was no more. Chuck pulled out the ladder and climbed up to check it out. Seems the industrial double stick tape that held it in place was no match for the Texas wind and 95 degree weather. Time for some MacGuyvering. A couple of plastic storage bin lids and duct tape made a decent temporary cover.

So another call to Amarillo. This time to the RV dealer who is an Airstream Authorized Service Center. Turns out they’re not on such good terms with Airstream, or just don’t like to do warranty work, because once they realized that it was under warranty they said they woudn’t fix it. So back to our list of Authorized Service Centers. Lubbock, about two hours away and in the direction were heading, is the place. Let’s hope our temporary patch holds. One good thing – no rain in the forecast.

So our week sounds like the makings of a country western song – my truck broke, I stepped in crud, my skylight blew away, and I can’t keep the flies at bay! Oh, did I forget to tell you about that part? It’s like Lord of the Flies at this campground. Anytime you open the door they zoom right in. We spent a good hour trying to catch the 30 or so that ended up inside after we took care of the skylight.

Oh and we did drive back to Amarillo, but of course the check engine light went off again so they coudn’t find anything wrong. Their theory is that the system just needed some time to reset itself. So we’ll just have to keep an eye on it. Let’s hope we’re done with the Amarillo Blues!

We are the Kenneys, Chuck and Yvonne. We're on a crazy adventure to visit National Parks while living full-time in our 30' Airstream trailer. Along the way we're taking our time to travel the backroads, explore small towns, and view the scenery that makes America beautiful. Join us!
Follow Kenneys See America on WordPress.com
%d bloggers like this: