I wanted to see the famous Alamo so we planned a week in San Antonio. Chuck found an RV park just a few miles from downtown right on the Mission Trail. It turned out to be the perfect spot for our touristy visit.

The weather was slated to be nice for the first few days so we took advantage by sightseeing each day. The first day we caught the bus out front and quickly arrived at the downtown attractions. We toured the Alamo, walked part of the Riverwalk, and explored La Villita, a historic neighborhood turned into shops.

The Alamo was originally built as a Spanish mission in the early 1700s and operated that way until 1793 when secularization occurred (more on that later). In the early 1800s the Spanish stationed a calvary unit there and it remained a military post until 1836, changing hands during Mexico’s struggle for independence and again during the Texas Revolution, which is when the famous Battle of the Alamo took place. We were surprised to find a Kenney listed among the Heroes of the Alamo . As you walk through the Alamo today it seems very peaceful and serene, like an enclosed garden, quite a contrast to the violent battle that took so many lives. 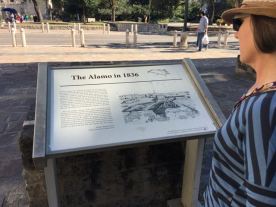 The next day we were off to Mission San Jose and Mission Conception, more of the missions built by the Spanish in their quest to convert indigenous people to Catholicism, claim the land, and collect taxes from the inhabitants. Amazing that these places were built in the mid 1750s and are still in pretty good shape. Originally just church structures, they were eventually surrounded by thick walls of adobe bricks for protection. Inside the walls were gardens, living quarters, workshops, and wells.

Mission San Jose is the most complete of the five remaining missions and gives a good picture of what life was like during the missions heydey. Living quarters line the walled compound and a few have been set up to depict Indian living quarters. Most converts were from the hunting and gathering tribes know as the Coahuiltecans. These tribes and were under threat from attacking Apaches and Comanches as well as European diseases. They gave up every part of their culture (dress, language, religion) in return for protection and steady food supplies.

Life centered around the church, with sunrise mass, noon prayers, and evening worship. Since missions were meant to be self sufficient, the Indians were taught skills like blacksmithing, irrigation farming, ranching, weaving, sewing and carpentry. Since soldiers were not always present, they were also taught how to defend the mission. I found it interesting that the missions were designed to be temporary. The intent was to establish self-sufficient communities loyal to Spain so after Indians were converted and taught the Spanish ways, the lands they lived on were deeded over to them (secularization). This process was intended to take about 10 years, but in some cases took much longer. 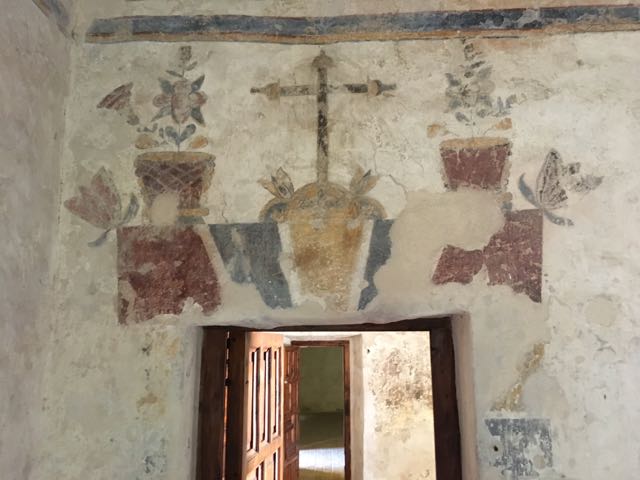 For my birthday we returned to the Riverwalk. This time we road the boat tour and learned more about the buildings and canals. Originally they were built as a means to protect the city from flooding caused by the San Antonio River. Lined with walkways on both sides they provide a peaceful oasis just below street level right in the heart of the city. 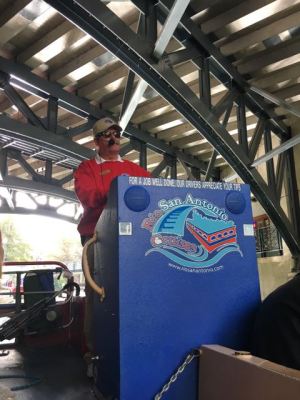 The area is mostly lined with restaurants, although there are a few souvenir shops, hotels, and one end of the mall. We picked one of the many canal-side restaurants for dinner and enjoyed watching the passing tour boats. It was a wonderful way to spend my birthday. 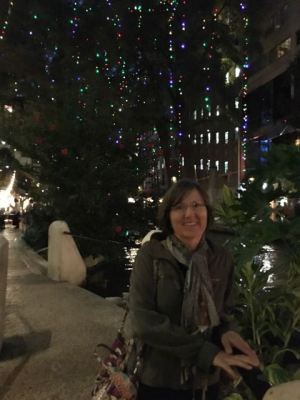 Then the rainy, colder weather moved in so we turned toward chores, laundry, grocery shopping, and a little Christmas shopping. With all the rain and grey skies, it felt like winter in Seattle.

It’s hard to believe we’ve been in Texas for 8 weeks and still haven’t even touched the eastern part of the state, but with a huge cold front projected to sweep down from Canada it is time to move on.