During our last week at Gilbert Ray, there were 4 other Airstreams camped in our loop. Walking the loop one afternoon we met fellow Airstreamers Bonnie and Alan. After swapping some stories, they invited us to join them for their club’s New Year’s Rally at Picacho Peak State Park. Having been on the road now for 6 months with mostly just the two of us 24/7, I thought that hanging around some other people might be a good change of pace. Not that I’m complaining because we genuinely enjoy being in each other’s company and we are both introverts, so the idea of walking into a group where we know no one makes us a bit anxious. But we decided to go for it, and I’m glad we did.

Now for those of you who don’t know, Wally Byam, the founder of Airstream, used to lead Airstream caravans all over the world back in the 50s. The Airstream owner’s group is called Wally Byam Caravan Club International (WBCCI) and when you see an Airstream rolling down the road with those big red numbers on the front that means they are a member. The numbers are how they identify club members on caravans (hard to tell all those shiny aluminum trailers apart—in fact one person at the rally warned us to be careful because it’s easy to walk right into the wrong trailer and Chuck almost did!) although not all members stick them on. Within WBCCI are regional clubs or units. This rally was part of the 4 Corners Unit (4CU).

While we have owned Airstreams since 2004 we have never joined WBCCI or been to a rally. We weren’t sure what to expect, but we studied the agenda, planned and shopped for the potlucks, and figured we would just see how it went.

The rally didn’t start until Thursday, but we had to be out of Gilbert Ray on Tuesday so we headed to Picacho Peak ahead of the rest of the group and spent two nights in the main campground. We soon found out how friendly the 4CU is when another early arrival stopped by to chat. After talking for a bit he assured us we would enjoy the group. We watched a few trailers pull in early on Wednesday and debated moving over to the group area ourselves but since it was cold and overcast we decided to stay put with our electric hook-up one more night. On Thursday we had our shortest driving day yet, about 2 minutes, as we moved to the group area. It was fun watching Airstream after Airstream arrive. In the end there were 38 trailers total, with several vintage models.

After setting-up we set out to walk the loop and gaze at all the different trailers. Immediately Bonnie and Alan spotted us and walked along introducing us to all the folks who were out reconnecting with old friends. By the time the Happy Hour mixer started we knew a few people, but it was still a little scary being the outsiders. We shouldn’t have worried because soon people were walking up to us and introducing themselves and talking Airstream—models, solar panels, floorplans, favorite destinations. It helps to have that common shiny orb to break the ice 🙂 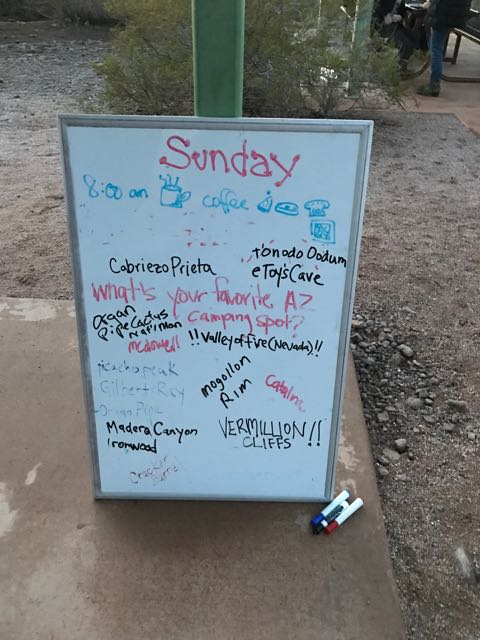 Each day there was coffee and breakfast goodies in the group ramada, although we were never moving early enough to partake. Daytimes there was quilting, viking bowling, or time to be on your own. Some even tackled the hike to the peak which requires gloves to grip the cables attached to the rocky path. We enjoyed a bike ride through the campground, but didn’t attempt the hike as the weather was a bit iffy.

Wait, did you say quilting? I know—not an ordinary camping activity, but a few years ago Bonnie wanted a way to fill the time at the rally so she spearheaded a service project assembling pre-cut quilt kits from Quilts for Kids, a charity out of her former home state of Pennsylvania. It has become a New Year’s rally tradition. A few people brought sewing machines, while others helped cut, pin and press. With 2 days of chatty, joyful work they finished 8 quilt tops which Bonnie will later sandwich with batting and quilt before sending them back to the charity.

In the evenings there was either a Happy Hour with everyone bringing nibbles to share or a potluck dinner followed by more chatting around the huge bonfire. Since it was the holidays the hosts decorated the group area with an inflatable trailer that had Santa popping out the door and the coolest light display ever with laser lights aimed at the desert foliage making it look like everything was coated with jewels. One night someone set up a telescope and we got a close-up look at the craters on the moon. Other activities included an entertaining white elephant gift exchange, giant Jenga, and a huge game of Left Right Center.

After the second night we were both feeling a little socialized out. It was a bit of overload after our long stint of aloneness, but then we started to relax into the rhythm of the rally and found that we really liked it. People were friendly. We got lots of tips for places to go. We got to exchange Airstream ideas and stories from the road. Other than some cold weather which had us digging for those winter clothes we thought we’d never need, it was a great weekend. In the end we decided we really enjoyed the rally and ended up joining the 4CU. We hope to make it to another rally someday to reconnect with all our new found friends!