Organ Pipe is what we expected Saguaro to be—a remote, quiet place with captivating views, giant cacti, and abundant hiking. It feels like a full fledged National Park with its great campground, nice visitor’s center, scenic drives and daily ranger programs. They even have a “Not so Junior Ranger” activity booklet for folks like me who really want to be a Junior Ranger again. 🙂 You can take the pledge and earn a patch and everything!

While we saw just as many giant saguaros at Organ Pipe as we did at Saguaro National Park, this park gets its name from another cactus. Organ Pipe is the only spot in the US where you will find large groups of organ pipe cactus growing wild. Unlike saguaro that shoot up one main column and then branch out arms, these look like a clump of arms coming up from under the ground. They reminded early settlers of church organ pipes, thus the name. The plants grow to about 15 feet tall and we saw everything from 3 to about 20 arms. Plants don’t flower until they are 35 years old and when they do the white flowers open only at night, an adaptation to the heat, and are pollinated by bats. Later red fleshy fruits provide food for Sonoran desert animals. 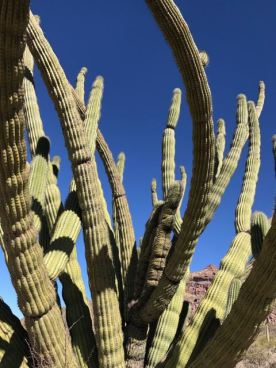 We found the largest Organ Pipe cactus in the park. It had cool crested arms in the middle.

Organ Pipe has one of the nicest campgrounds we’ve found in a national park. There is a staffed entry station where they assign you campsites, collect your fee and answer your questions. When we arrived the friendly ranger greeting us was from Forks, WA!

A little aside about park rangers here. We have met so many helpful, knowledgable, kind rangers who care about sharing and protecting our nation’s beautiful lands. I never realized that most are part-time seasonal workers earning low wages. It takes a ranger about 10 years to get a full-time, year round position. These are folks who do this work because they love our parks and I’m glad they are there to make our visits not just possible but also pleasurable. In addition our parks wouldn’t run without the many volunteers who staff visitor’s centers, act as campground hosts, and work on trails. A big thank you to the folks working to make sure our parks continue to thrive for another 100 years and beyond! 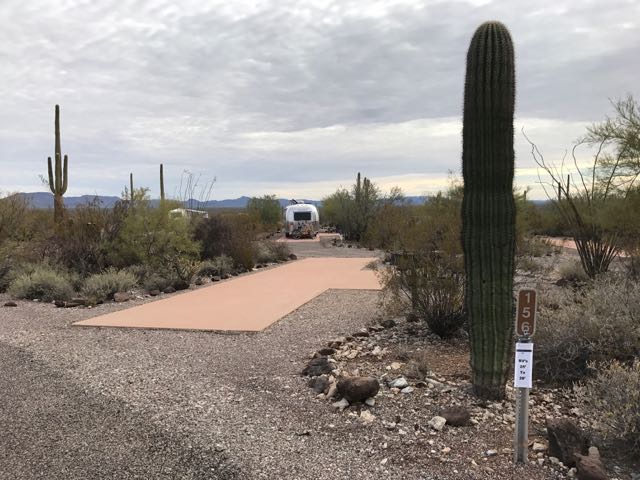 Back to the campground… Every site has a poured concrete parking pad and patio area. A few have ramadas (shade structures over the picnic tables). There is decent space between the sites, nice desert landscaping providing some privacy, free solar showers (which we didn’t try) and really clean restrooms. The campground was pretty empty so we asked and February is their busy season although it sounded like the 208 sites (174 of which are for RVs) are rarely all taken. This little gem is still undiscovered.

Part of that may be due to its proximity to the Mexican border. People seem to fear border areas, but we’ve been following the border through Texas and Arizona and never felt unsafe. Here they had lots of signs warning visitor’s what to do if they encountered illegals crossing into the US. Basically it boils down to leave them alone and report sightings to a ranger. They say don’t give them water because they may venture even further into the desert and get stuck. In opposition to this there is a group in town that reports over 90 bodies have been found in this area in the last 2 years and they regularly put water in remote areas as a humanitarian gesture.

We did not spot anyone while we were hiking (they say it’s rare as these folks don’t want to be seen), but we did see a couple of black water jugs on the side of a trail, a sure sign illegals had been there. (They use black water jugs because they don’t glint in search lights). And one day several border patrol vehicles were near the entrance with a woman handcuffed in the back seat. But we always felt safe in the campground. Rangers and border patrol patrolled frequently and the only people we saw around were other campers. Last year we read an article about how the park had a bad reputation, but a new superintendent turned that around by bringing in more staff and border patrol.

With no worries about safety we were free to enjoy the park. We spent much of our time relaxing at camp soaking in the sunshine and views, but we did get out for some activities too. On our first day we rode our bikes the 1.5 miles to the visitor’s center, took in the exhibits, and walked the short nature trail. Chuck sat through a little of the ranger talk on pupfish, an endangered species they are bringing back. The ride back to camp had a few good uphill bits, that let me know I’ve been getting lazy.

The next afternoon we took a hike from the campground to the Victoria Mine (4.3 miles with just a bit of up and down). Other than the crumbling stone building, it wasn’t very interesting. Still with the heat it did wear us out a little. I do not think this is a place you want to hike in summer. There is little shade and the sun and low humidity mean you have to carry a lot of water to stay hydrated, even in the winter.

Our favorite hike was on the 21 mile, unpaved Ajo Mountain loop drive. The park guide lists 8 scenic drives, all on unpaved roads. This one had great views and a booklet to guide you. Numbered markers along the way signaled stops with information in the booklet. We were also in search of the crested cacti and rock arches listed in the “not so junior ranger” booklet. Luckily they give you mileage points, but we still couldn’t locate some of them.

About half way around we stopped to eat our lunch and head out on the hike recommended by the “Forks” ranger. One guide said it was 3 miles roundtrip to Bull’s Pasture, another 4.2. All I know is we kept climbing and climbing and when we thought we were there, we weren’t, so we trudged on. Luckily someone put a sign at the end to tell us we had made it! Although the trail descriptions claimed it was only an 800’ elevation gain I’m sure it was more! That ranger was right though, it was worth it for the great views. I’m finding I love exposed rock mountains rising up toward the sky.

I wish we could count Organ Pipe toward our official National Park number, but alas it’s not on our map. Still it will remain one of our favorites.