After all the activity at Alumapalooza we needed a little time to recharge. Chuck found the perfect spot on the shores of Lake Erie at Maumee Bay Campground.

This large park was peaceful and green, just what we needed. The sites had a semi-manicured garden sort of feel and there are lots of birds to watch. There was even a small laundry room on site so we were able to catch up.

We enjoyed a ride on one of the many bike trails out to views of the lake, but mostly we just relaxed and killed the tiny black ants that had found a path inside (our first invasion since we hit the road). Luckily there were just a few.

Before the weekend got underway we headed out to Stow, Ohio where a small city campground had first-come first-serve sites. There are no campgrounds at Cuyahoga Valley National Park and this was the closest option, plus at just $11 for electric hook-ups the price couldn’t be beat. It was a bit like camping in a city park, you know the kind with baseball fields and basketball courts, but served the purpose.

It was hard to tell exactly where the sites were because there were no defined parking pads, just a big grassy field dotted with trees and power posts randomly placed down the middle. Luckily one of the regulars helped us figure out the boundaries of the huge sites. It felt weird to drive right on the grass and park, but later when the park supervisor came through to collect our fee he said we were good. Even with the weird “camping next to a baseball field behind a neighborhood” vibe, it was convenient to Cuyahoga.

We made two trips into the park and we kept wondering how this got to be a national park. Most of it looked like many of the city parks in Seattle, with trees and greenery and a bike path next to the river. We could have been on the bike path back in Bothell—it looked exactly the same. I’m guessing that folks who aren’t from Seattle probably have a better appreciation for this park, but we did find a few cool things.

Many folks take a train ride through the park, but we didn’t figure you would see anything different than the scenery we saw driving through so skipped it. We wished they had an option to ride a canal boat through the locks, that would have been cool! But I think much of the passageway is no longer deep enough for boat travel although if you had your own kayak you could float sections of it.

We started our visit at the Boston Store Visitor Center. This restored 1836 building focuses on the craft of building canal boats which became a big industry in the area. 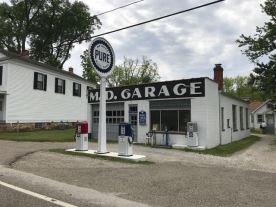 The boats were 14 feet wide and up to 80 feet long. They had to be able to float in just four feet of water. Some boats were for carrying goods and others for carrying passengers but all were pulled by teams of mules who walked along the towpath on the sides of the canal. Boats often carried an extra set of mules. Sometimes whole families lived on the boats and parents would tie young children with rope to the center of the boat so they couldn’t fall overboard.

After that we walked the boardwalk to Brandywine Falls but skipped the loop trail as there really was nothing to see.

Then we headed over to the Ledges Trail and walked 1.5 miles of the trail and while the rock ledge formations were kinda cool, the trail made us think of Seattle.

On our last day we drove the scenic gorge Parkway and walked out to Bridal Veil Falls. After all the flat farmland in the midwest I’m not sure why we weren’t more excited to be in the trees, but after all our years in the Northwest I think we just yearn for a different kind of scenery.

After that we headed to the another visitor’s center.

This one told the history of the canal system. I think this was the most interesting part of the park. Both Jefferson and Washington were proponents of building a national canal system back in the late 1700s and by 1840 there were over 3000 miles of canals in the US linking New York to New Orleans. The Ohio & Erie Canal (not to be confused with the Erie Canal in NY) opened in 1827 between Cleveland on Lake Erie and Akron. When finally finished in 1932 it was 308 miles long, with 146 locks and a rise of 1206 feet and connected to the Ohio River.

The canal became a major transportation artery for goods heading out of and into Ohio. On the outbound trip boats mostly carried farm products and raw goods like timber and coal and on the inbound trip they carried manufactured goods like nails and cloth. Before this everything had to be carted by horse and wagon, so most folks grew or made what they needed. The canal system led to a national economy. The canal system was short lived though. By the 1860s railroads were prominent and became the favored mode of transport. One interesting fact, President James Garfield was a canal boat worker as a teenager, driving the mules that pulled barges along the canal.

Since we were there on Saturday we got to see one of the original, hand-operated locks in action.

I don’t think Cuyahoga will make the list of our favorite parks. It seems like a great  regional park. Supporting that is the fact that by far most of its visitors are locals who come to bike or jog along the river towpath, hike in the woods, or mountain bike (they had an impressive mtb trail system in the Gorge Parkway area). Still I was excited to put sticker number 11 on the map. Only 48 more parks to go! 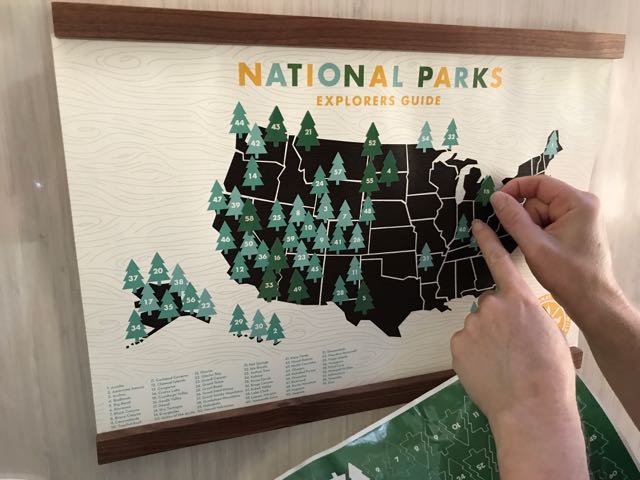 2 thoughts on “More of Ohio”