Our solar installation was one of our favorite things about our old trailer. We liked the freedom of being able to camp in places without hookups and still use our induction cooktop, blow dryer, iron, tv, even a few hours of A/C. We knew we wanted solar on our new trailer too but we couldn’t snag an appointment until the last week in May so until then we had to find places to stay with electric hookups. Hoping we’d get less rain and more sun by staying east of the mountains we searched Campendium, our favorite campground app, for places with hook-ups in Eastern Oregon.

It was nice to be back in nature after our stint at the KOA in Boise, but other than fishing, there wasn’t much to do in the area. It was a little too cold to take out the kayak and I hadn’t found a good hike. The park is on the Hell’s Canyon Scenic Byway so we decided to drive the 22 mile road out to the visitor center. 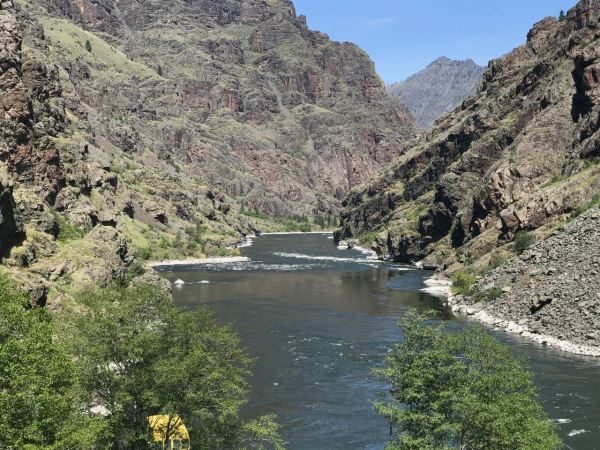 There were a bunch, like hundreds, of koi just sitting near the surface. Perhaps someone released some pet fish and they multiplied?! I could have scooped them up with a net. Of course then I’d have to do something with them like clean them. No thanks.

We had no cell service, but could access the slow campground internet if we walked down near the bathrooms. Mostly we just relaxed, read, and had a Star Trek marathon as we watched the pollen rain down. Seriously, the pollen seems crazy this year!

The big bummer was our first flat tire. Our site was not level and even with the leveling blocks we ended up a little off to one side, but it seemed to be getting worse. I told myself it was just my imagination, but after our second night we could tell there was definitely a problem.  Sure enough one of our tires had gone flat. Our session on how to change an Airstream tire at Alumapalooza last June sure came in handy!

Next we headed to Wallowa Lake near Joseph Oregon. 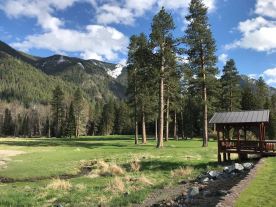 I had read about all the great things to do in the area like a rail bike you ride on the tracks, a tram to the top of a mountain with great hiking and views, and a farmer’s market in town. Unfortunately the season begins Memorial Day weekend and it was mid-May so all of this was closed. 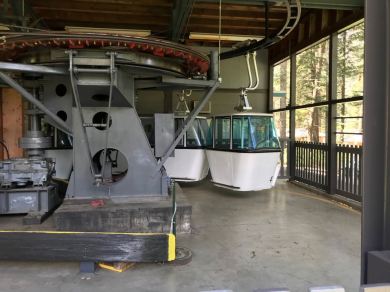 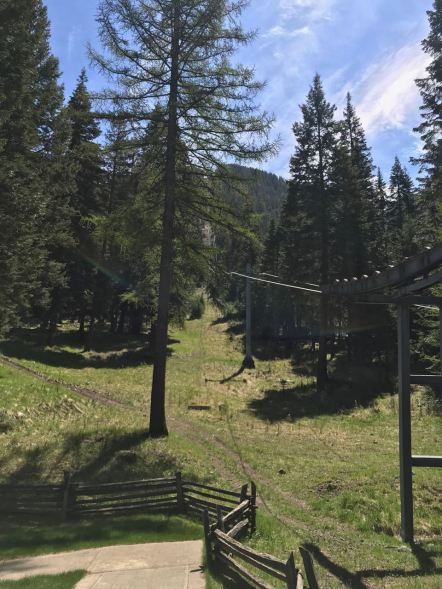 One day was supposed to be sunny so we walked through town with it’s old buildings, cute shops and bronze statues all with the gorgeous peaks in the background. 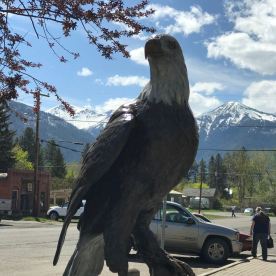 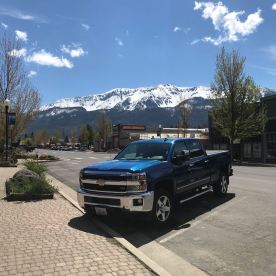 We also made a quick stop into Les Schwab. Man those guys are awesome! No charge and a short while later our tire was as good as new. Turns out it was a broken piece of snow chain. Our neighbors got a good show as we reinstalled the tire. 🙂

Next we headed to the Columbia River and spent a few nights at Maryhill State Park enjoying the nice weather and a trip to the winery.

Then we hung out for a few days at Deschutes River State Park on the Oregon side. 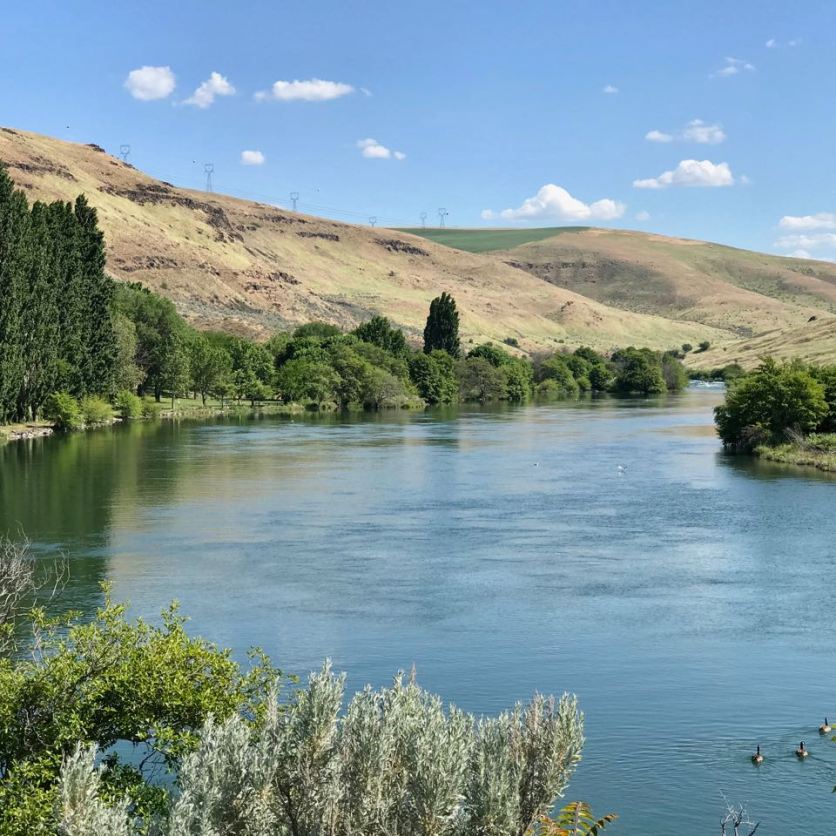 The highlight was riding along the Deschutes River trail that leaves right from the campground.

Then we dropped off our trailer at the solar place and headed north to Bothell for a week at McMenamin’s Anderson School. 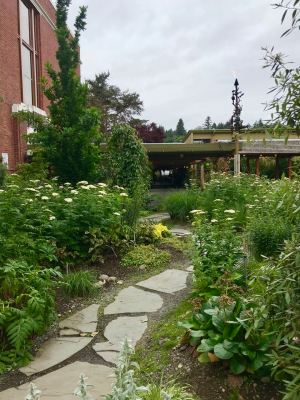 With doctor’s appointments and visits with family and friends the time went fast, but not fast enough. It’s a pretty cool little hotel but after a couple of nights we were tired of eating out and craving our own bed. So when we got the call that our trailer was ready we checked out early and hit the road.

We picked up the trailer and boondocked a few nights at Rufus Landing with great views of the John Day dam, Mt. Hood, and the kite surfers. 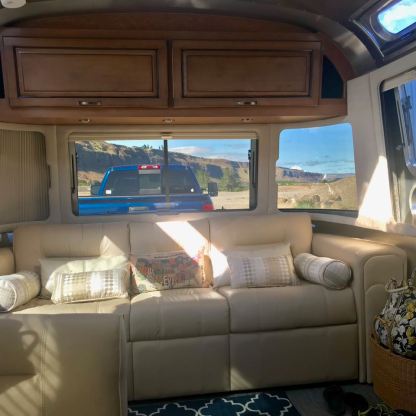 Then spent another night at Maryhill and happened upon a vintage trailer rally and a T@B trailer rally. Lots of cool trailers surrounding us! 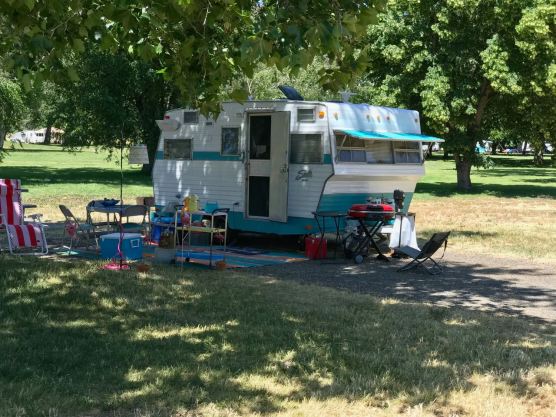 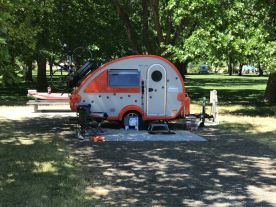 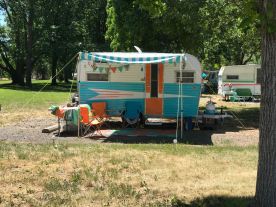 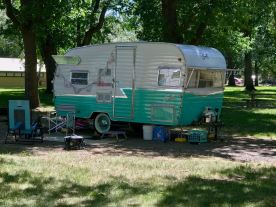 We’re headed toward Utah for the summer so we traced our path back across Oregon. We stopped this time outside LaGrande Oregon at a nice little park on the Grand Ronde River, Hilgard Junction. The views out our window were awesome. It made a nice relaxing stopover. 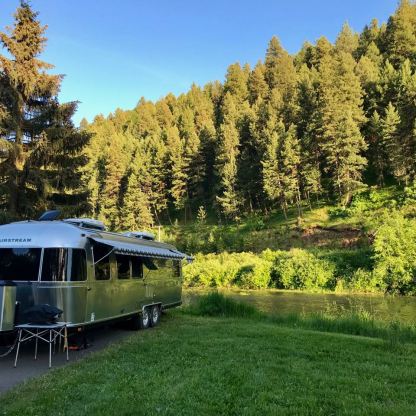 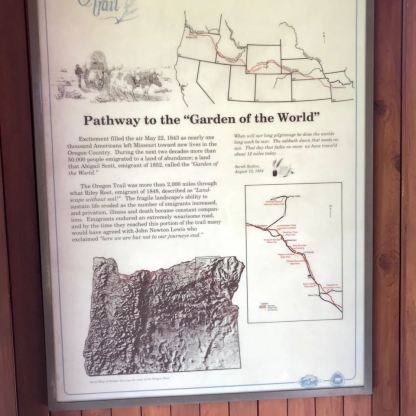 Then back to Boise where we stopped in at the Airstream Dealer in Caldwell for a few minor warranty issues. They have camping spots right there which made it easy.

Plus we got to see two more of my Dad’s softball games.

Next up Utah, but first a stop at the moon.

We are the Kenneys, Chuck and Yvonne. We're on a crazy adventure to visit National Parks while living full-time in our 30' Airstream trailer. Along the way we're taking our time to travel the backroads, explore small towns, and view the scenery that makes America beautiful. Join us!
Follow Kenneys See America on WordPress.com
%d bloggers like this: