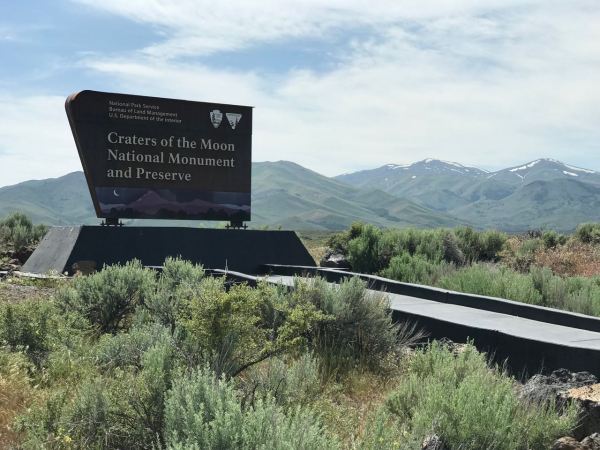 There you are driving through Idaho’s hills and green fields with snow capped peaks in the distance and then suddenly you end up in this strange land. 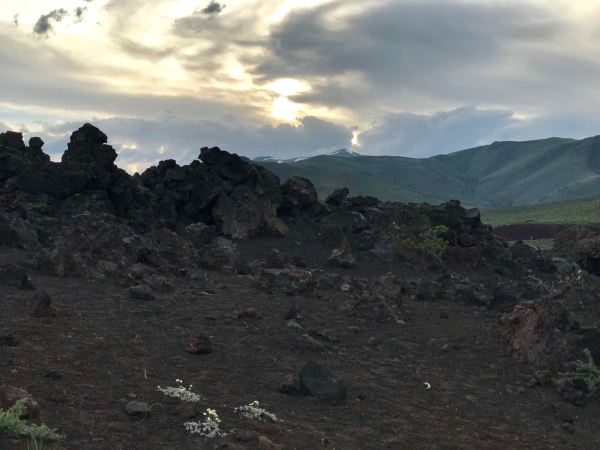 Craters of the Moon National Monument has been on our list since the start of this adventure. Since it wasn’t too far off our route to Utah we decided to spend a few days there.

Boy did we luck out. Without knowing it we hit prime wildflower bloom. The Monkeyflower’s entire life cycle (sprout, bloom, seed, wither and die) takes only 3 weeks and we were here for the bloom! Those tiny, pink flowers added a beautiful contrast to the dark volcanic rock.

This place is really strange, especially for being in the middle of Idaho. It feels more like Hawaii, and in fact all the signs explaining the different types of rock had pictures of lava from Hawaii. Mostly this place reminded us of the lava flow we visited in New Mexico, Valley of Fires, especially on our first night when we walked from the campground to the Trail of Lava. 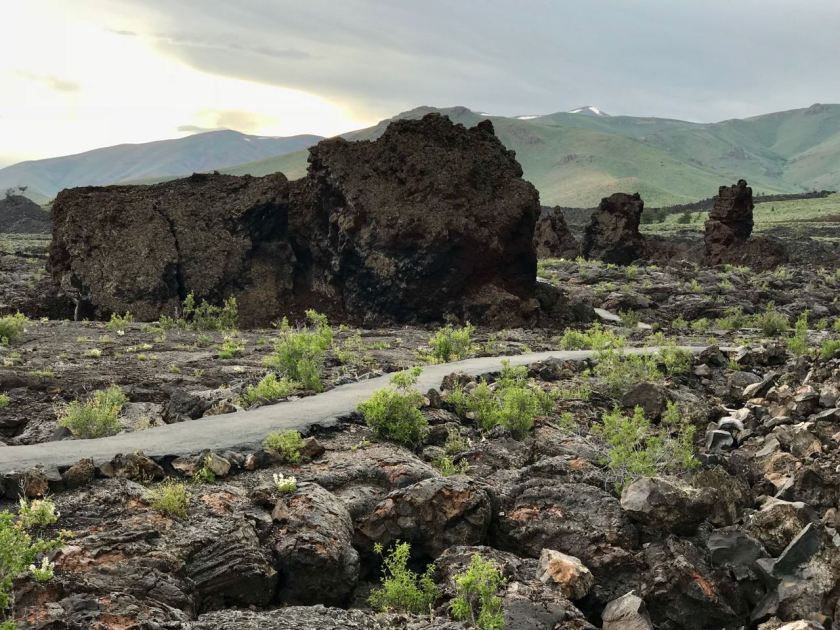 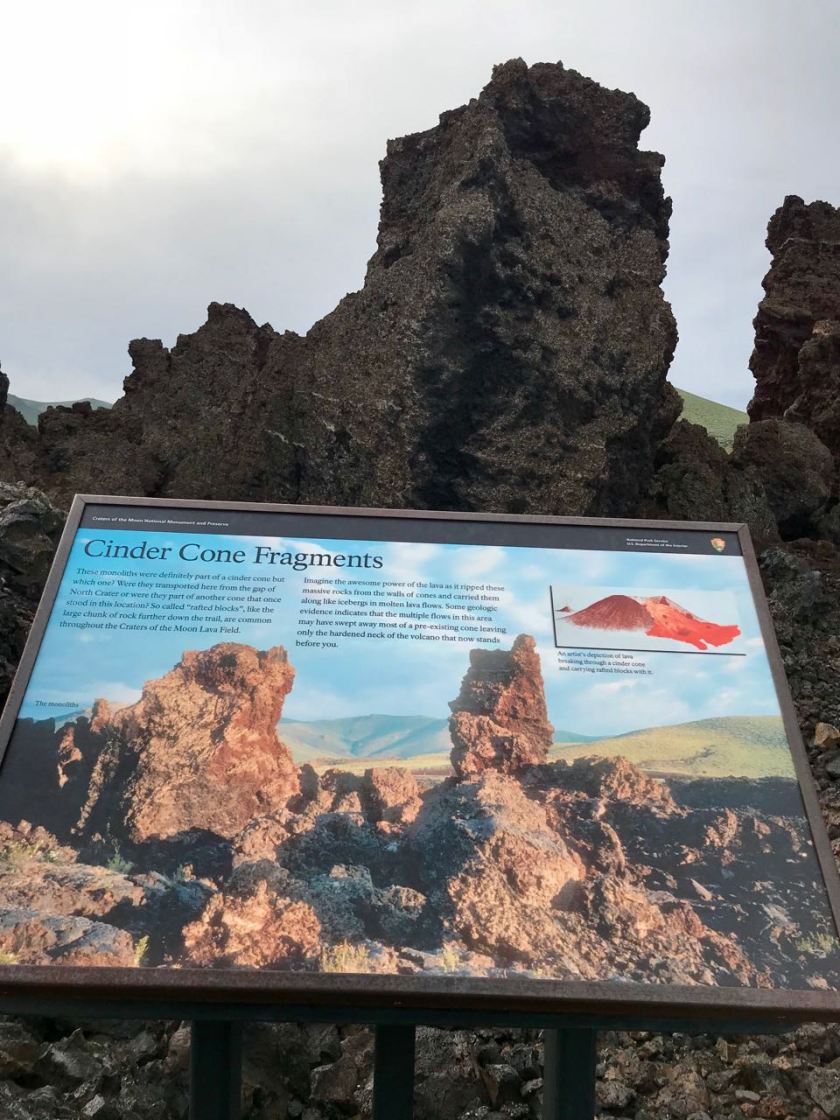 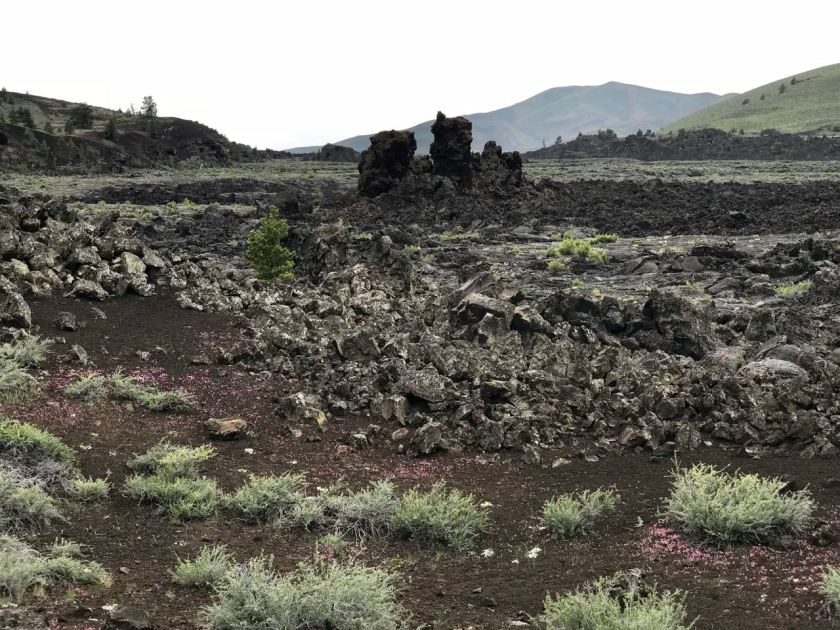 The next day we drove to the wilderness trail parking area. There were two trails, one to the tree molds which are impressions of trees laying flat in the lava. The other trail said it went to Lava Trees, described as an upright version. I thought this sounded interesting so off we went. The trail started out through some awesome lava rocks, then came into more of a meadow with small cinders, almost like lava rock gravel. The wildflowers seem to love these areas. 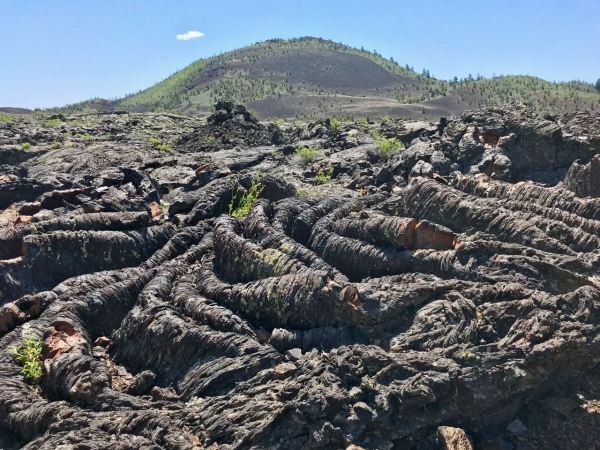 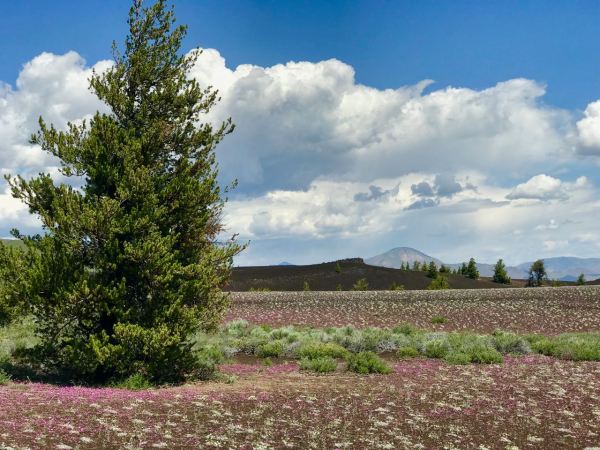 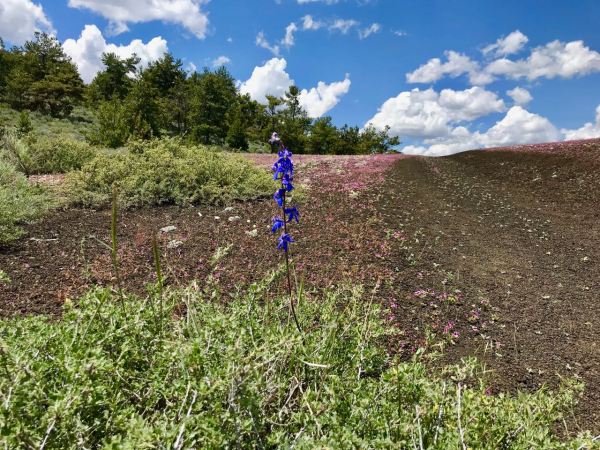 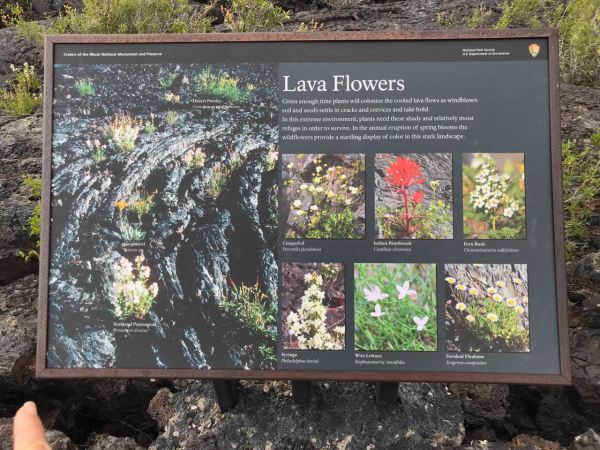 Finally we saw the sign for the lava trees. It wasn’t what I expected, but it was cool. The lava surrounded the tree and as the tree burned the steam cooled the lava enough to harden it into an impression of the tree leaving tree shaped voids. 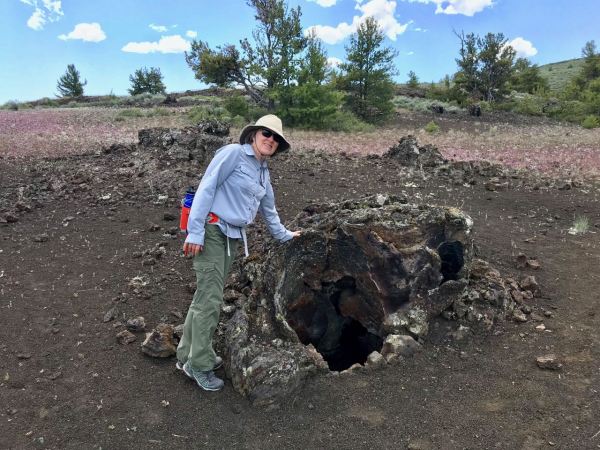 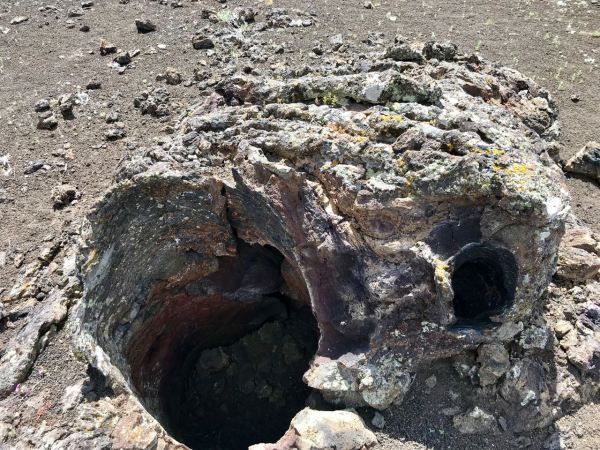 On our last day we drove the short loop again, this time stopping at several other areas. We skipped the very popular Inferno Cone where lots of visitor’s were hiking up the barren cone and instead stopped at the nearby Spatter Cones area. 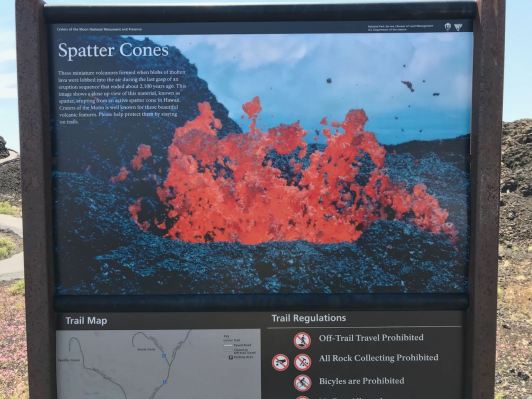 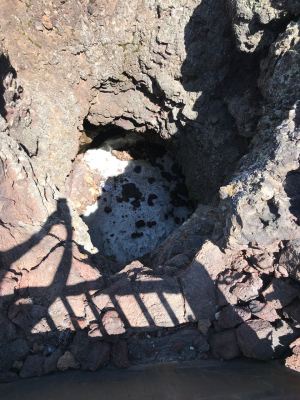 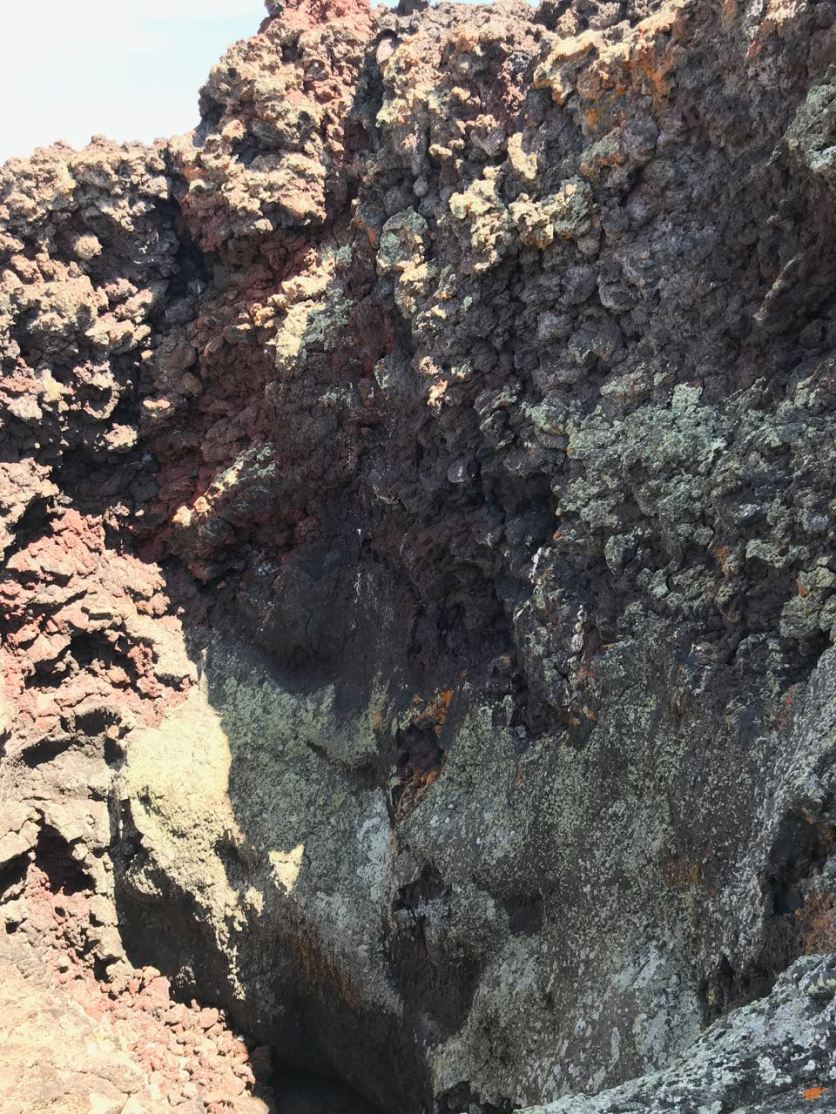 After a quick look into the spatter cones we hiked up the steep trail to Big Crater. We had been joking that there were no craters at Craters of the Moon, but after the short steep climb we found the craters! And great views around as well. 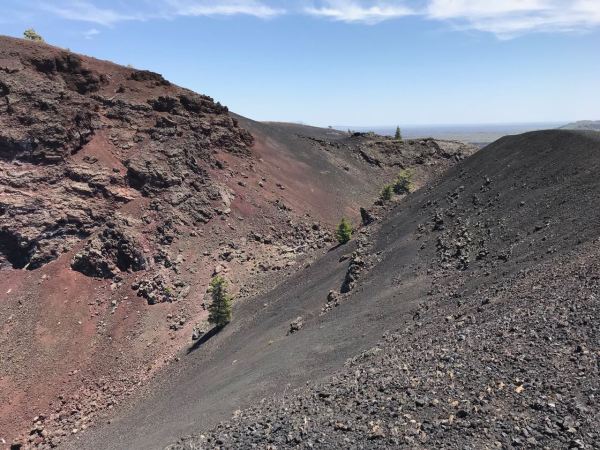 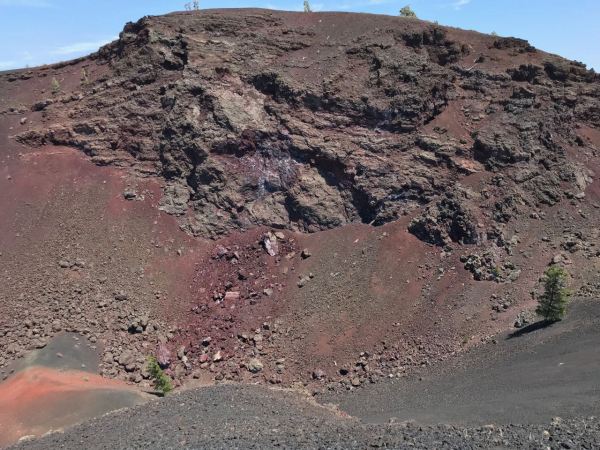 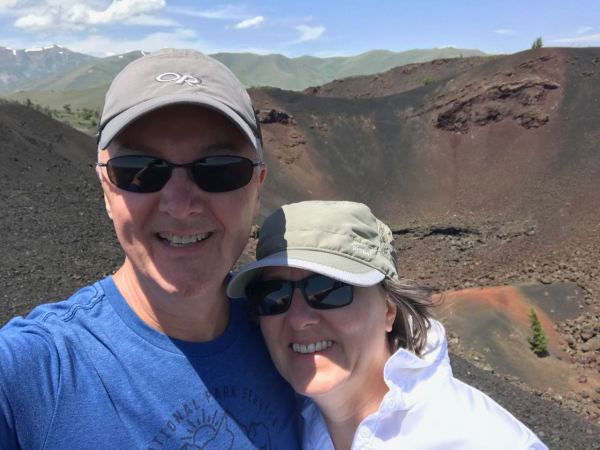 It’s a hike that wasn’t really at the top of the ranger recommendations, but was definitely worth it! Our last stop on the loop was Devil’s Orchard, another great area to view wildflowers. 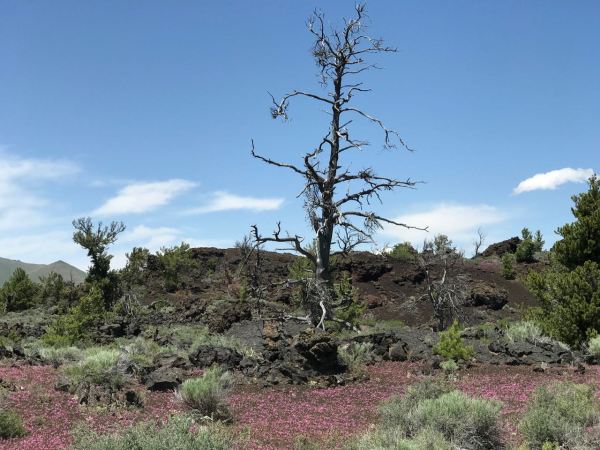 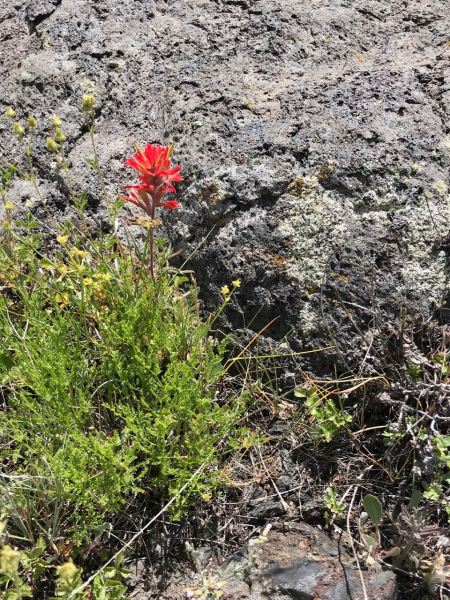 Overall Craters of the Moon was a great stop with much more variety in the lava formations than we had seen at Valley of Fires, plus the wildflowers were gorgeous! 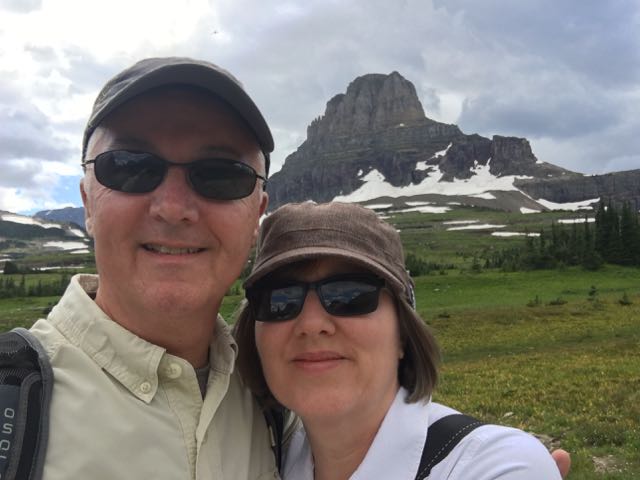