These are the things they don’t tell you about Utah: it’s dry and dusty and windy and most of all the elevations are killer! I should have known something was up when the tagline on all the tourist brochures read Utah, Life Elevated, but I was too distracted by the spectacular pictures of the red rock vistas. 🙂 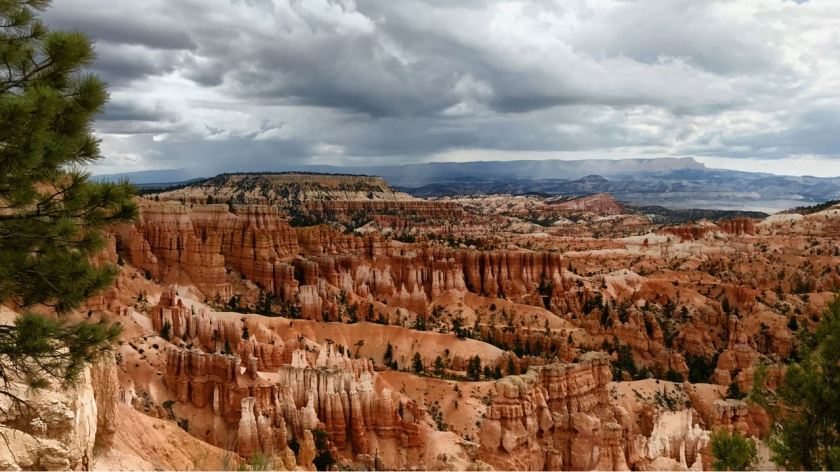 Even with the high elevations you don’t get a break from the heat, many of our days were spent in the 90s and even 100s. The only saving grace is that it cools off at night. I didn’t realize how the heat combines with the elevation to totally wipe out your energy. You would think that since we’ve been at over 5000’ for the last month I’d be somewhat acclimated, but apparently not since my heart rate shot up and I was breathing hard with every little bit of exertion. Of course Bryce sits at 8000 feet so we had climbed even higher. Let’s blame it on that. 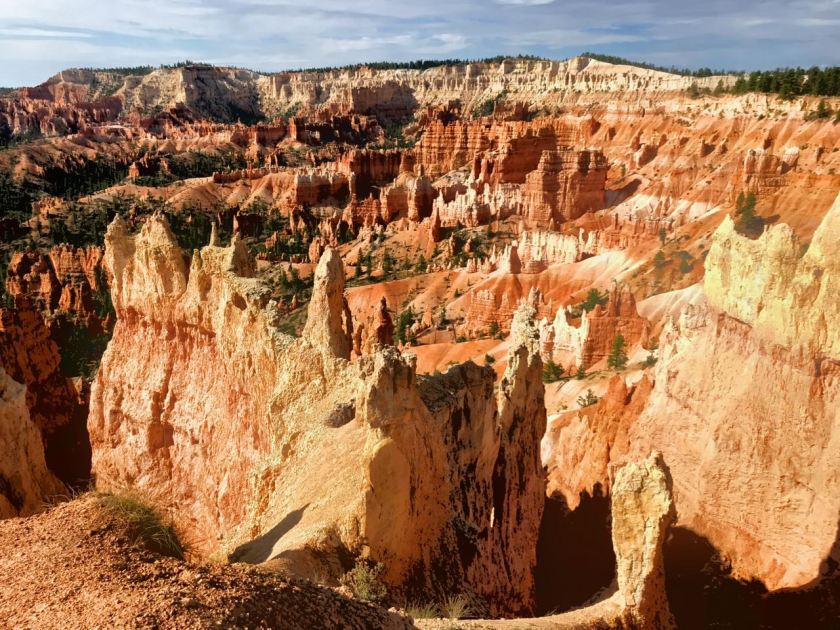 We were worried this would be another very crowded national park campground, especially since it was a holiday week. So we got up super early for the drive from Escalante and ended up arriving too early. We found a good site at 9am, but by noon most of the other campers had left and we could have had our pick.

That’s ok we enjoyed watching the park police pull folks over (I presume for speeding) and some sort of propane leak scare involving the fire department in the day-use parking lot below us. And we were just a short walk from the visitor’s center, shuttle bus, and right on the bike path which we rode up to the lodge one afternoon. 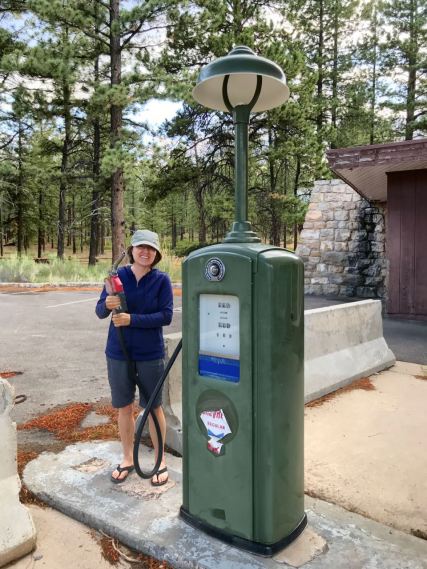 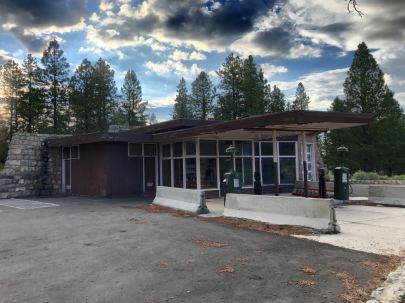 We saw the old service station that used to serve the park before private businesses set up shop just outside the park. 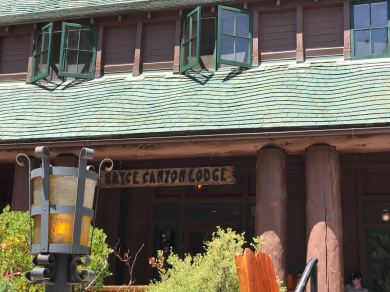 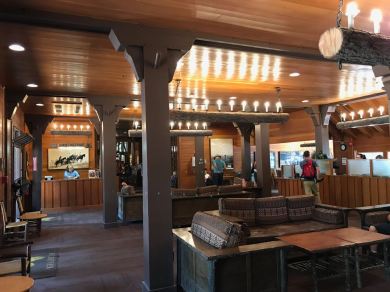 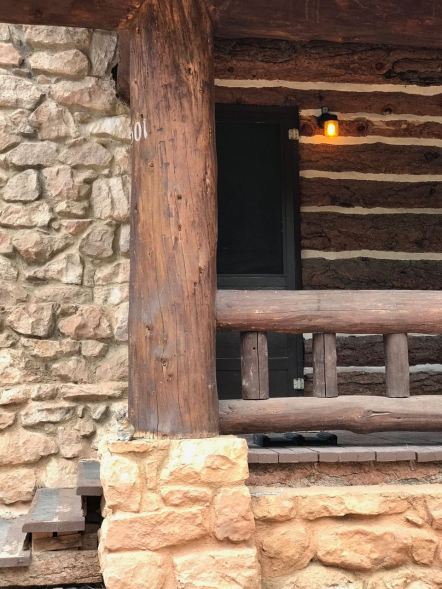 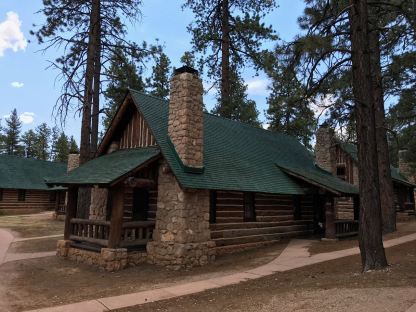 The lodge and cabins had cool log cabin architecture.

Nearly every hike in Bryce starts with a descent into the canyon, a bunch of little hills and the promise of a steep climb back up at the end. That combined with the elevation factor meant our hikes here required a lot more stops and a slower pace plus a day off to recuperate. Still we managed to get out quite a bit.

For our first foray, I decided to avoid the steep climb with a hike along the rim. This gave us a good overview of the canyon that we’d later explore. We started by boarding the free park shuttle near the campground and riding to it’s furthest stop, Inspiration Point. From there it was about a 2.5 mile, mostly downhill trek back with every little turn giving a different view of the canyon. Because you can see so far and with the way the light falls on the hoodoos, sometimes it’s hard to have any depth perception when looking into the canyon. 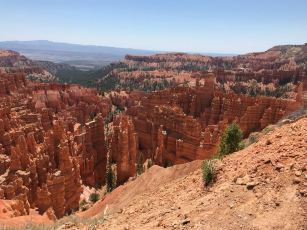 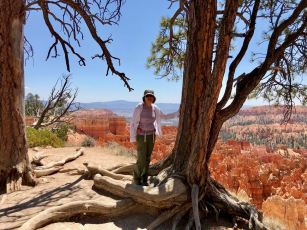 Next up was the Navajo-Peekaboo Loop Trail, our most ambitious hike at 5 miles with 1500’ of elevation gain. We had everything packed and ready the night before so we could get an early start to avoid the parking crowds and beat the heat. We started with the steep downhill through the Wall Street area and into the canyon.

Then the Peekaboo Loop took us up close with some of the hoodoos. It was a lot of up and down and since it is also used by the horse tours, parts were pretty smelly. 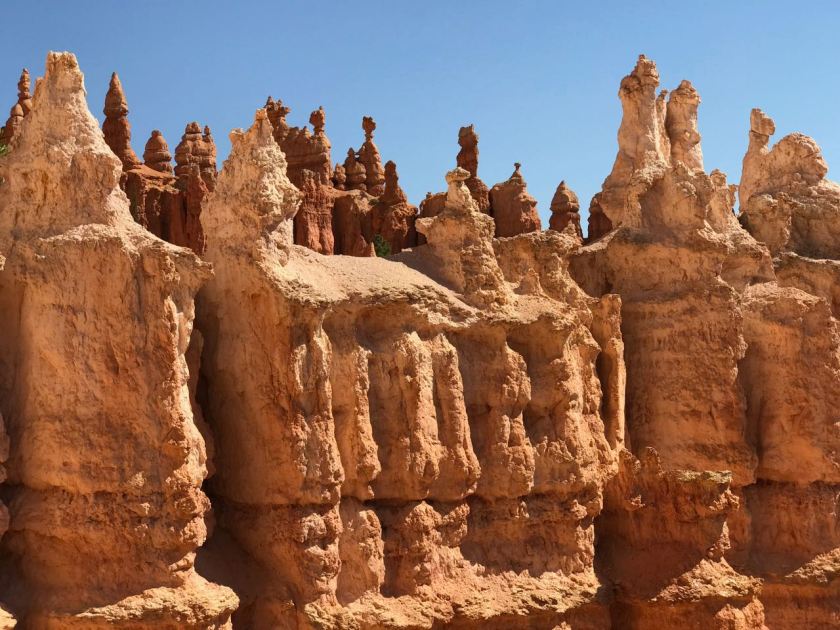 On this hike we earned our “I Hiked the Hoodoos” status by collecting selfies with various markers in the canyon.

The last leg came back up past Thor’s Hammer. 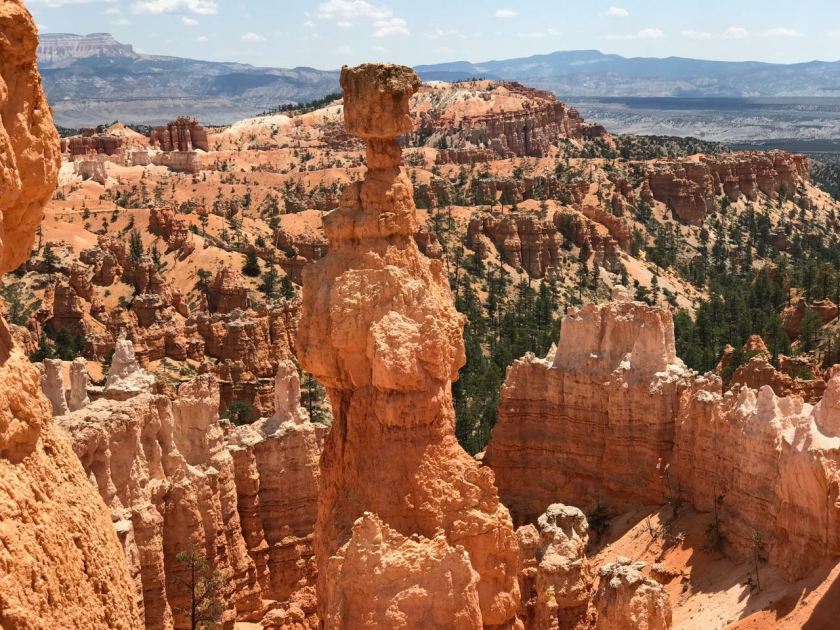 It was a trek, but well-worth it!

Over the weekend we took the 18 mile drive to Rainbow Point. Since most folks stay in the Bryce Amphitheater area which is accessible via the shuttle, this drive further into Bryce Canyon is less crowded. I had read somewhere to drive all the way to the end and then stop at the viewpoints on the way back. This turned out to be good advice since the pullouts were then on the right hand side and easier to enter and exit. Also by the time we finished at Rainbow Point the parking lot was overfilled. Be sure to visit both the Rainbow and Yovimpa viewpoints while you’re parked there. Many folks missed the second as it isn’t well marked. 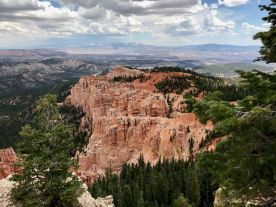 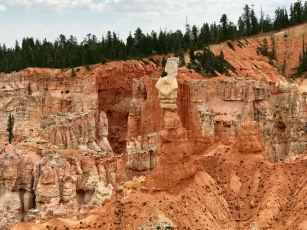 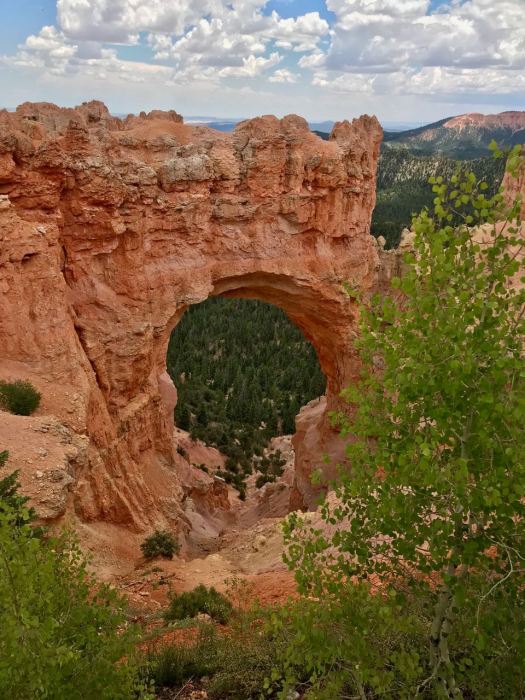 We originally paid for a week at our campsite, but decided to extend a few more days and take one more hike into the canyon. The views were just too amazing to miss. This time we did the Queen’s-Navajo Loop. It started with a gentler descent into the canyon ending up at a hoodoo named for it’s resemblance to Queen Victoria.

Then instead of heading back the way we came we figured we’d go up the Navajo trail through Wall Street since it had looked so cool the day we hiked down it. We were glad to be finished up by early afternoon as thunderstorms moved in. 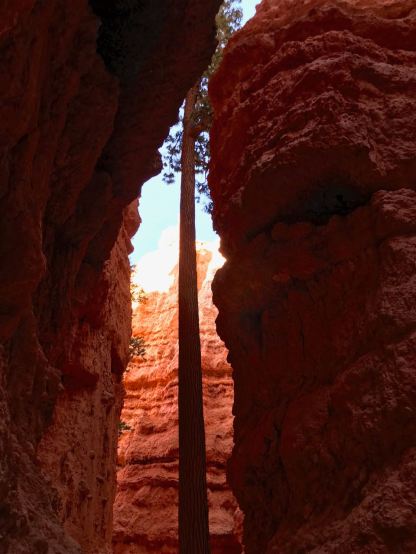 The views here never grow old. Every time we ventured to the rim, we were in awe.

And so we spent our entire stay in the park even though there are many other things to see in the area. Guess we’ll just save those other places for next time.