I’m beginning to call this the Summer of Smoke. Everywhere we go is covered in a haze, including the Grand Tetons. While the air quality wasn’t bad like Crater Lake, our views were obscured by a layer of gauzy smoke giving them a painterly, slightly out of focus quality and making the Grand Tetons a little disappointing.

For the second time we arrived perhaps too early. We had visions of Glacier where people start circling at 8am for spots so we got here by 9:30am. At Gros Ventre (apparently pronounced grovont, long o then short o) they assign you a spot upon check-in. The lady in the office said she gave us a nice spot, but she would have lots more spots when people left at checkout. Oh well, lesson learned.

We headed over that afternoon to check out the visitor’s center in Moose. What a stunning building! 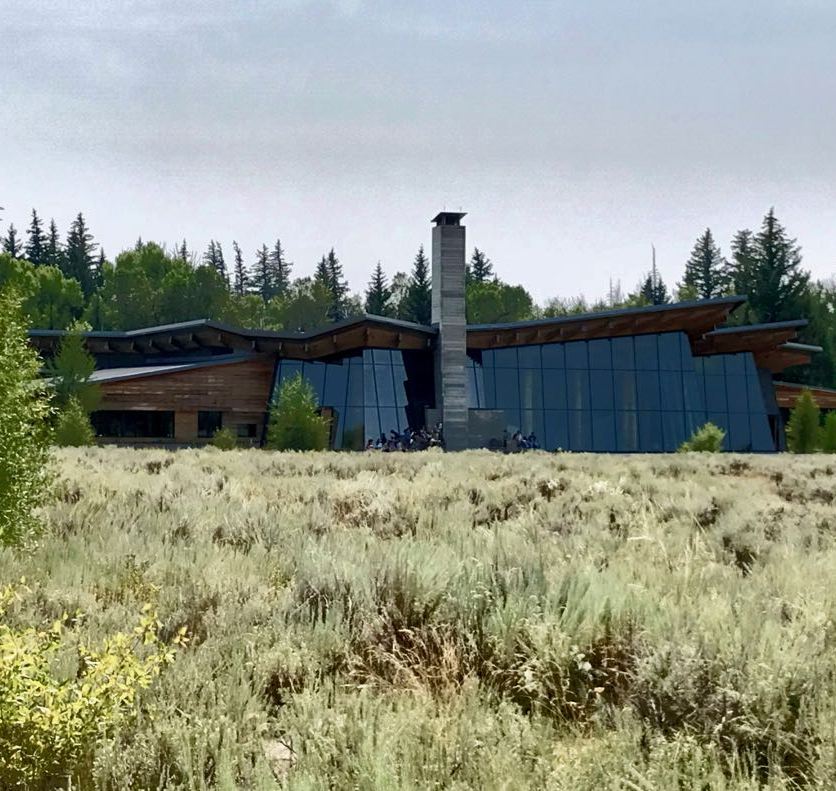 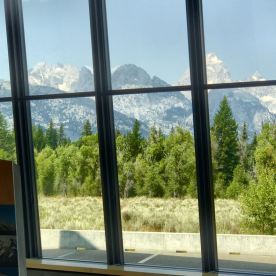 And all the metal sculptures inside were amazing. 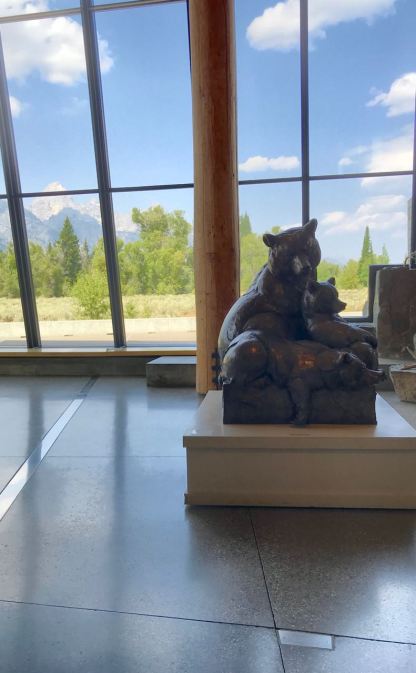 The visitor’s center has an agreement with the National Museum of Wildlife Art in Jackson to display some of their pieces. We didn’t make it to the museum but it looks like it would be cool.

This is another park that requires driving. We took the 42 mile loop to see the sights pulling out at viewpoints along the way. With the haze we weren’t treated to what I am sure are stunning views of the Tetons.

On the bright side this is one park where the wildlife did not disappoint. Near the campground we kept seeing people stopped with their cameras and binoculars out, so one evening we decided to head over there.

To our great luck there was a bull moose out munching along the river’s edge and a cow walking around as well. 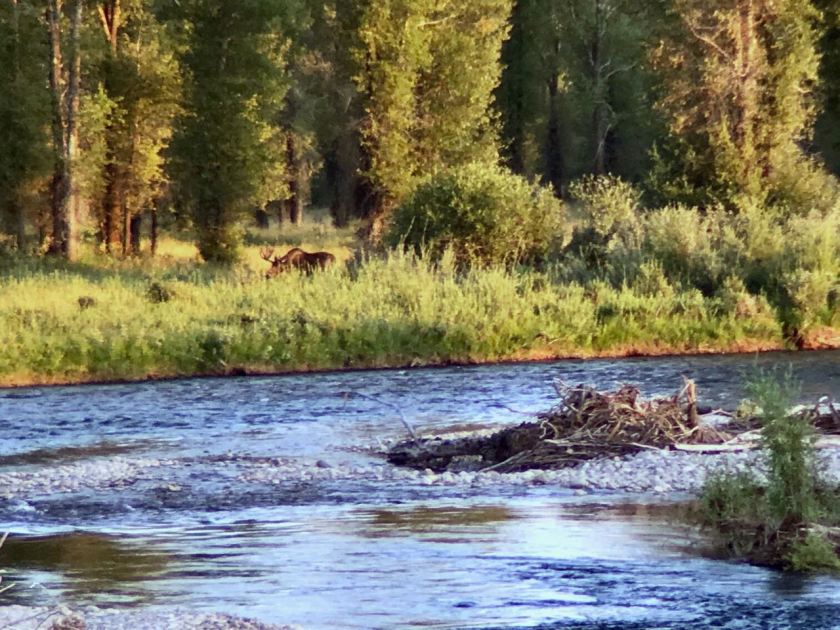 We went back the next night and saw another, even larger bull. He would clamp his mouth around the base of a willow branch, and pulling his head upwards, strip off all the leaves as he slurped them into his mouth. Fun to watch!

By Menor’s Ferry we saw two otters swimming along, humping up out and back down into the water. At first they looked like fish jumping. They were moving too fast for a picture. We also saw a coyote, many pronghorn, bison and a buck with a nice set of antlers.

We didn’t do any hiking in the park, but we did make the effort to go kayaking. First we had to buy a $15 Wyoming Aquatic Invasive Species permit, then get our kayak inspected at a Wyoming boat inspection station, and finally buy a $12 National Park boat permit. Luckily all these could be accomplished near Moose Junction in the park. So one morning we were up early to eat breakfast and head to the launch area for String Lake, about 45 minutes from our campground. The ranger warned us that by 9am the parking lot is full, so we managed to arrive by 8:45 and had our pick of spots.

After inflating the kayaking, stowing our lunch and water, and zipping on our life vests we headed off. We saw a few hikers along the shore, but there was no one else on the water.

It was a beautiful morning and the mountain views were out.

The first lake, String Lake is shallow and we had to avoid rocks and a few sand bars as we paddled about a mile to the north end of the lake. Here we had to portage over to the next lake.

The second lake, Leigh Lake, was much bigger and we saw several canoes and kayaks, many loaded down with gear to camp in the designated sites on the shore. The only access to this lake is by paddling the way we came (or hiking) which means they had to portage not only their canoes, but all their gear too. I’m sure it was worth it though for the peace and quiet and views.

After paddling over to see the glacier we found a sandy beach for lunch and then headed back.

As soon as we portaged back to String Lake we were glad we had gotten up so early. The lake was filled with paddle boards and kayaks, plus swimmers and picnickers all along the shore. Not so peaceful anymore! And folks were circling the lot looking for parking spots. We were tired, but glad we made the effort to enjoy a kayak adventure here in Grand Teton.

To finish up our visit we decided to head back to a few stops we had skipped on the loop drive.

Menor’s Historic District was an interesting stop. Here Bill Menor started a ferry to take folks and their wagons across the river in the late 1890s. The boat looked almost like a catamaran with two wooden boats under a big platform. The ferry worked by pointing the boats upstream, then angling them slightly to use the current to move the ferry across. 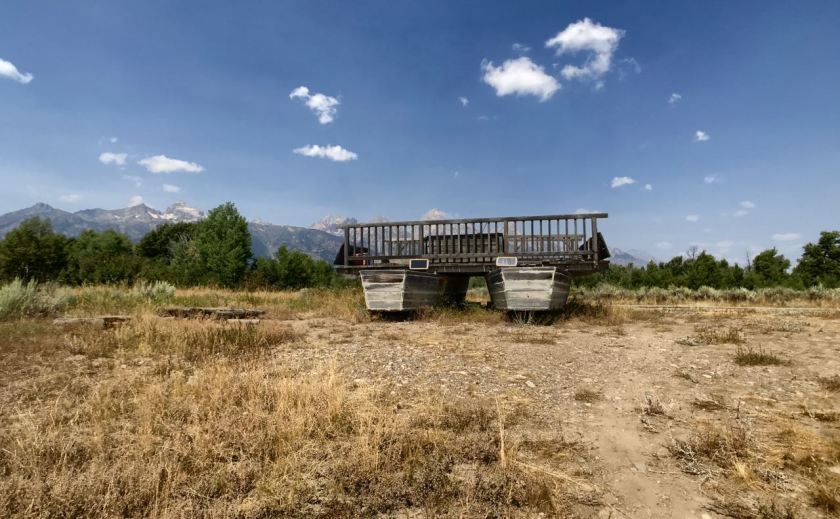 Later Menor sold out to Maude Noble, a transplant from Philadelphia who came to Jackson Hole in 1915 to stay at a dude ranch for the summer and ended up staying. Her log cabin was moved to this spot in 1918. In 1923 it served as the site of a historic meeting that led to the formation of the park. 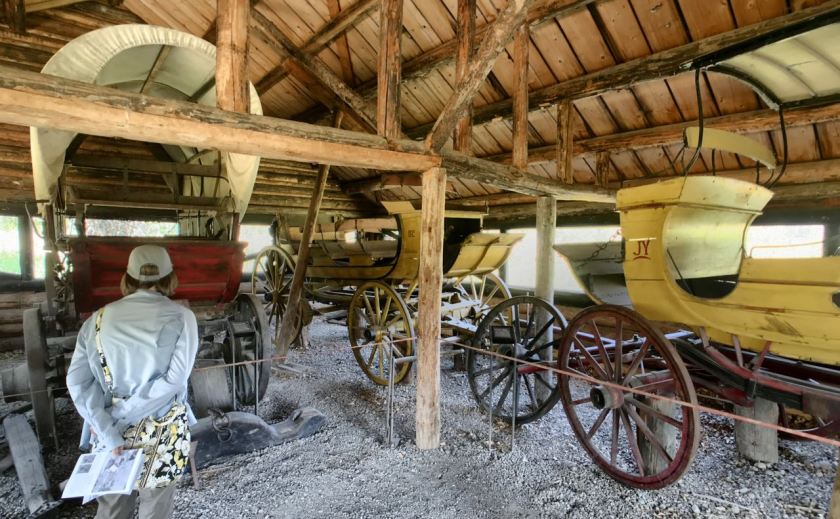 We braved the tourists in Jackson. By the way I finally figured out that Jackson Hole is the valley and Jackson is the town.

This park has underwhelmed us. Maybe it’s the smoky haze obstructing the views, or maybe it’s the crowds in the popular areas or the very touristy town of Jackson, or the fact that we have to drive so far to get to everything, or the people who kept yelling at each other (some folks shouldn’t take their teenagers or spouses on a road trip in a tiny RV), but we just weren’t feeling it.

Still we did have some amazing experiences, including our first ever moose sighting and an amazing kayak outing so perhaps we’ll be back again when the skies are clear and we can be amazed by those Teton views.

Update: After a week in Yellowstone we stopped back in Teton for a few days on our way south. The first day and night it rained and cleared the skies, treating us to the stunning views for which the Tetons are known. Much better without all that smoky haze! And I saw a mother moose with twins. And we had a great meal at Snake River Brewing. This place is beginning to grow on me!

8 thoughts on “Not So Grand Tetons”