You really need smell-a-vision to appreciate this park. So if you can, just set a bowl of rotting eggs next to you as you read and you’ll get a much more accurate feel for our visit to our nation’s first national park.

Day 1: After driving down the torn up road to arrive at the dismal campground (which I nicknamed the crumbling mud pit) we set up and ate some lunch.

Because the campground was so dismal we didn’t really want to spend a day hanging out there. Instead we headed out nearly every day to explore a region of the park. Long before our week was up we were exhausted. We liked the sights we were seeing but strangely we weren’t really enjoying the park. Here’s how our week went.

The next day we decided to just start driving and see what we found. After making our way through the mess of roadwork near the campground, we headed north toward Canyon Village. It is only 16 miles, but with all the stops we made it took us over 4 hours to arrive. This should have been a sign of what was to come—long driving days.

We stopped first along the Yellowstone River. 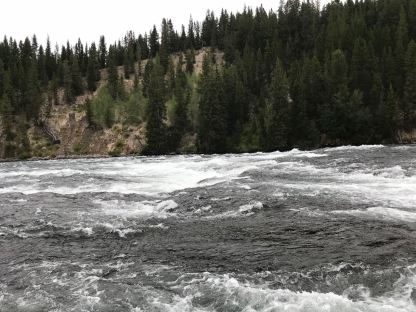 Next up was the Mud Volcano Area, where we got an introduction to the thermal features of Yellowstone and their accompanying smells.

After walking on the mile long boardwalk and peering in pools of mud and steam and inhaling the pungent, rotten egg aroma we continued driving north. Somehow the smell stayed with us for quite a while.

We saw a bunch of cars stopped on the side of the road in the Hayden Valley so pulled over to watch the bison. To our delight they were running down the hill and then swimming across the river. Even the babies were swimming.

Some of the bulls were getting possessive of the females. We saw one that appeared to be keeping a female away from the group, heading off her attempts to run back by blocking her way, looking like a herd dog. I think it’s getting close to breeding season.

Next up was the Grand Canyon of the Yellowstone. Despite the back-up on the entrance road there was plenty of parking. I wasn’t prepared for this stunning view of a waterfall surrounded by the yellow-pink rock canyon walls. I guess it’s just not one of the views I associate with Yellowstone. However, this view helped make this the nation’s first national park. It was painted by Thomas Moran while on an expedition with Dr. Ferdinand Hayden in 1872 and taken back to Washington D.C.to show Congress proof of Yellowstone’s wonders. 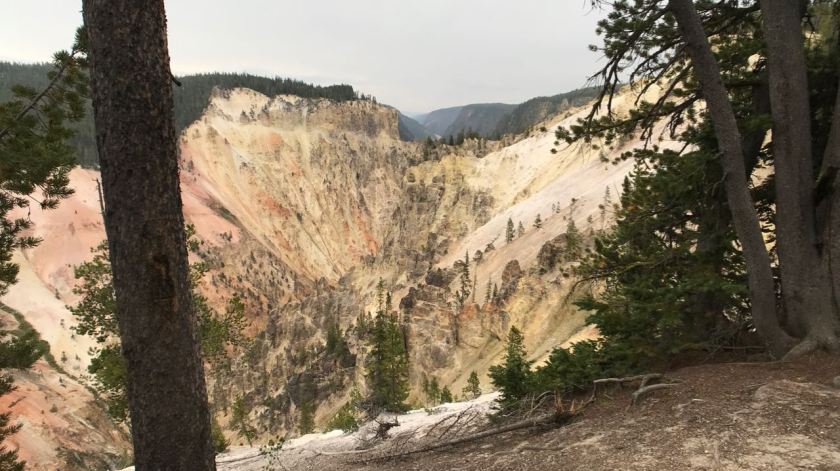 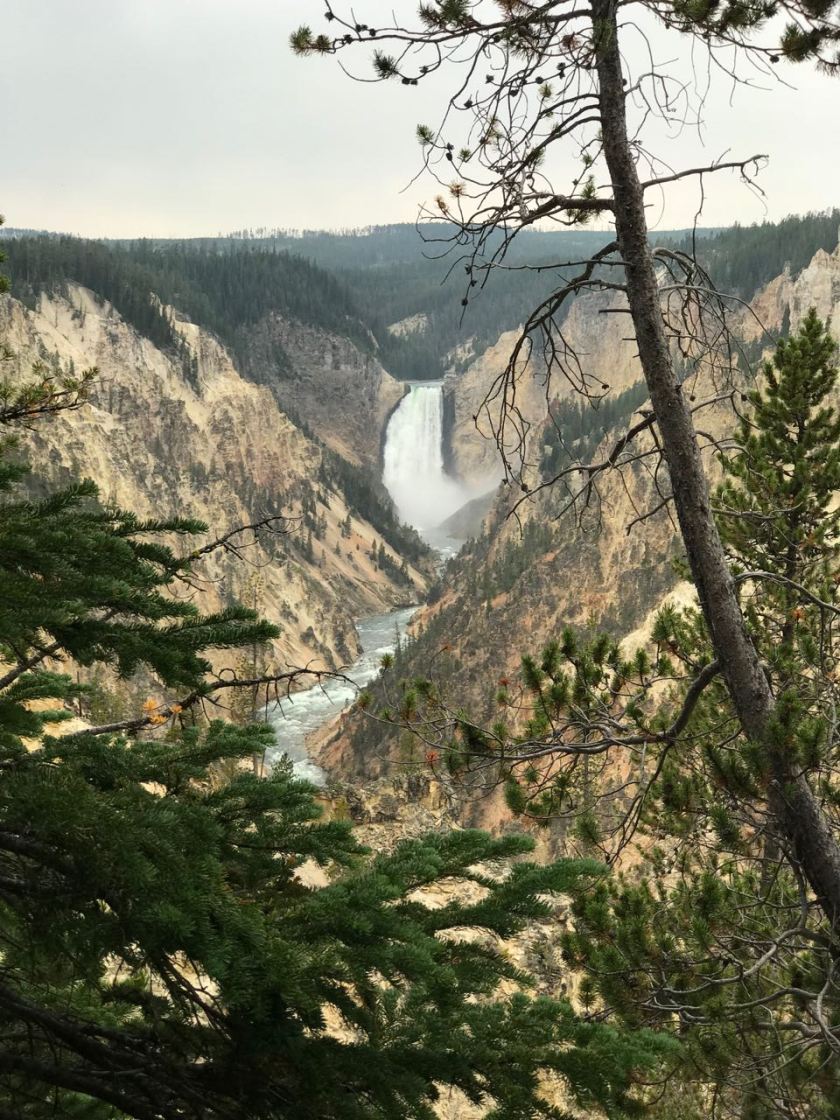 Exhausted we ended up at the Canyon Visitor’s Center. This one had a good explanation of Yellowstone’s geology and status as a super volcano.

After some refueling at the soda counter we headed back the way we had come, this time stopping at the north rim of the canyon for the views from Lookout Point and Grand View. 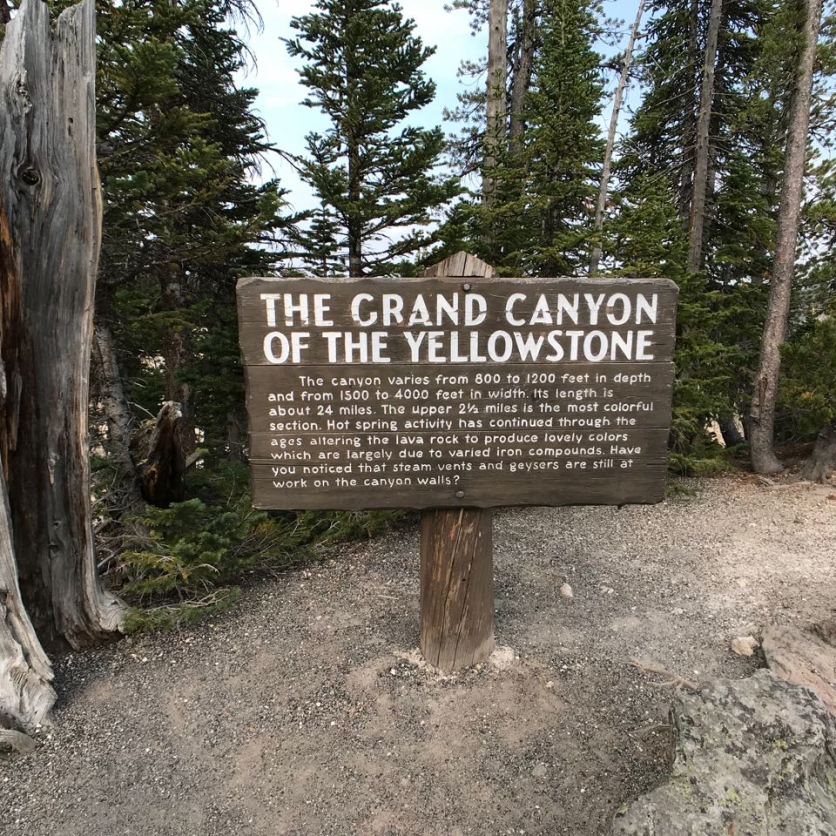 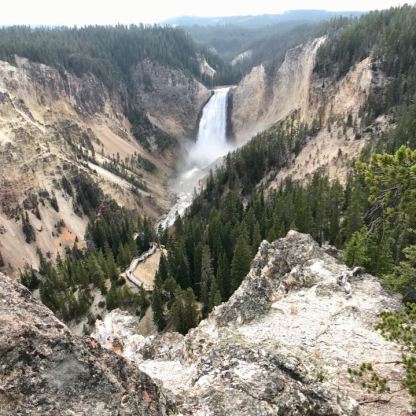 And then for the Bison back-up on the way back to the campground. 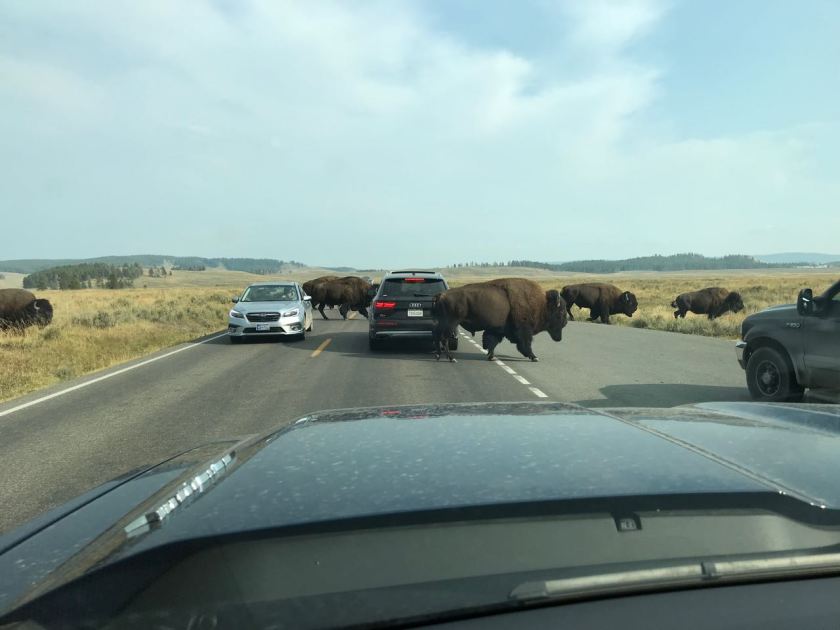 It was a good day with a diverse view of Yellowstone.

This time we headed south from our campground through what seemed like endless lodgepole pine forest, so when we spotted an overlook we stopped and found a waterfall. 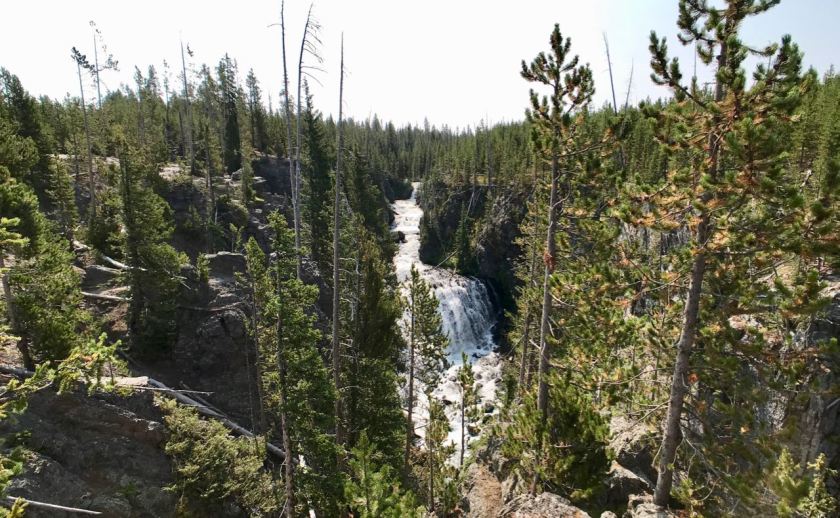 Next up we rolled into Old Faithful and had no trouble finding a parking spot. Since the next eruption was about 45 minutes off we explored the visitor’s center before securing a spot on the viewing benches.

Afterwards we walked on the boardwalk. The sun was getting to me so we didn’t make it to all the features before heading to get ice cream. 🙂

Next we stopped at Black Sand Basin and Biscuit Basin. Because all these areas are similar, it’s hard for me to decide which photos came from where so here’s a sampling. My favorite were the clear, turquoise pools. 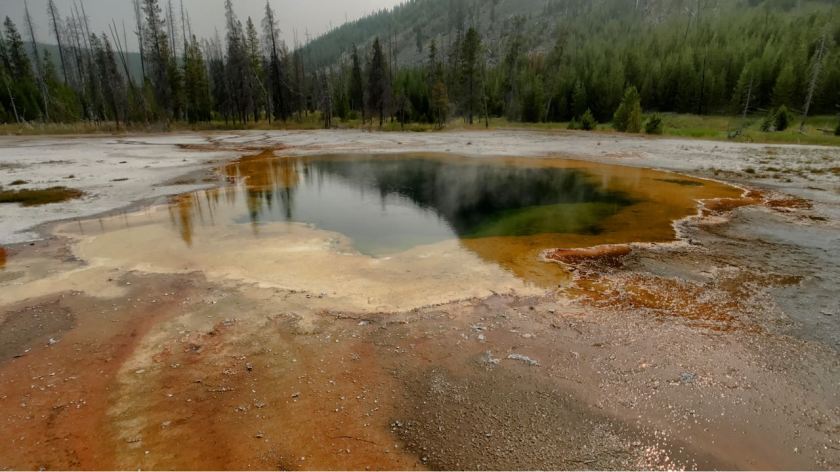 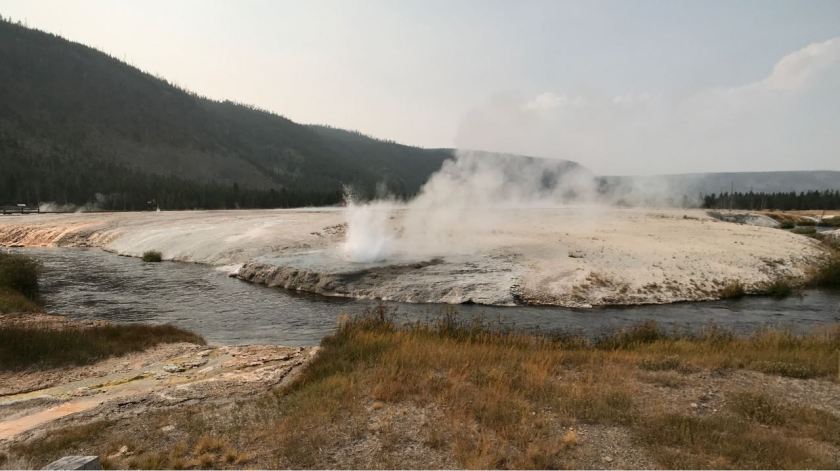 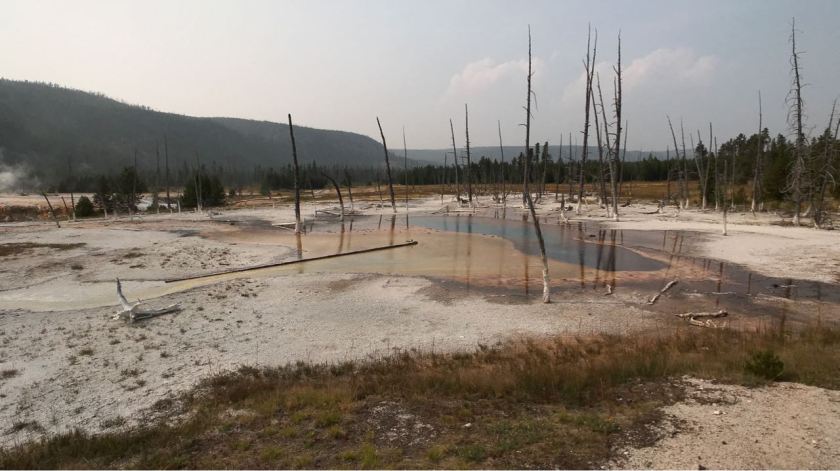 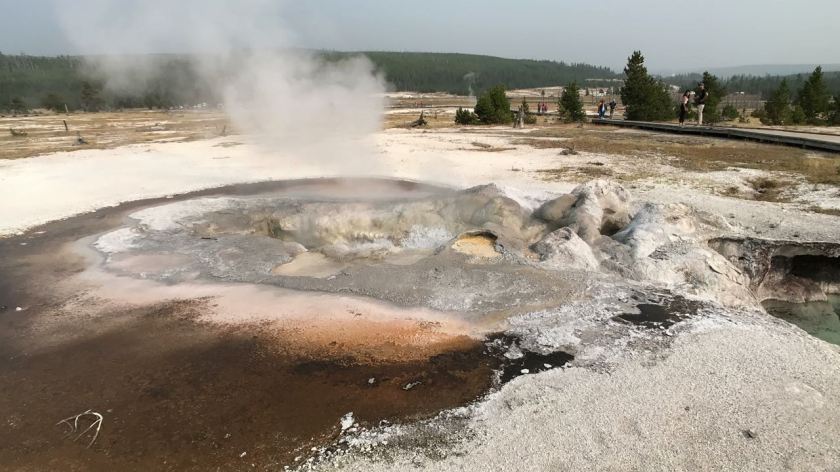 Our last stop of the day was the Grand Prismatic Spring. I had read on Chapter3Travels.com that the trail up to the overlook was the best way to see the spring so we pulled off at the unmarked gravel lot filled with cars. By now we were tired but I decided that the trail couldn’t be that long so we trudged on and I’m glad we did. It was one of my favorite views in Yellowstone. 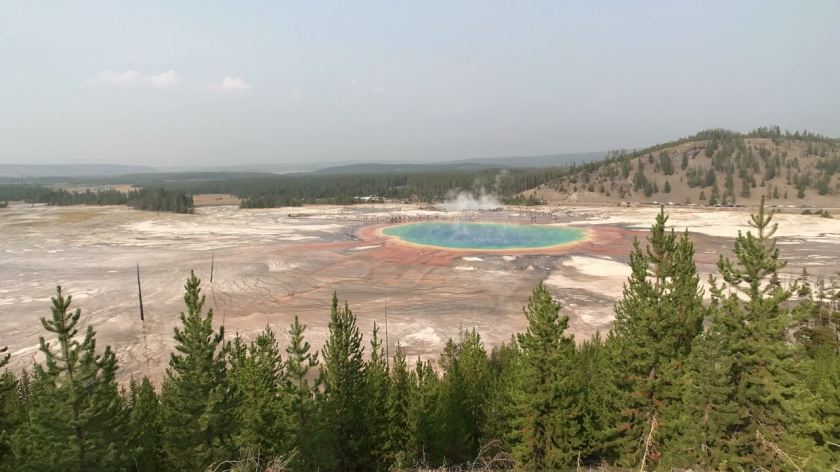 The pictures don’t quite capture the awesome colors so you’ll just have to google it to see the brilliant rainbow of colors that come from the organisms that live in the differing temperatures of the water. We could have walked the boardwalk up close to the spring, but there was a waiting line of cars at the parking lot entrance so we decided to skip it and the other features we passed on our way around the rest of the loop.

We needed to recuperate so decided to stick close to the trailer. We headed to the Lake Lodge only a mile away because they had wi-fi. After paying $4.95 for an hour we discovered the speed was so dismally slow it wouldn’t load anything, much like our phones. So we ended up driving back up to Canyon Village for some shopping, stopping along the way in the Hayden Valley where we’d had the best luck getting internet access on our phones.

We were a little puzzled by the Christmas music and Santa hats in the shops. Apparently once a huge snowstorm hit on August 25th stranding visitors at the lodge so they threw a giant Christmas party.

We were still tired (and I’m getting tired just recalling it all) but it was time to finish the most important items on our list, so off we went again back past stinky Sulpher Caldron and the bison. Heading north from Canyon Village there were few viewpoints and the road was steep and winding. 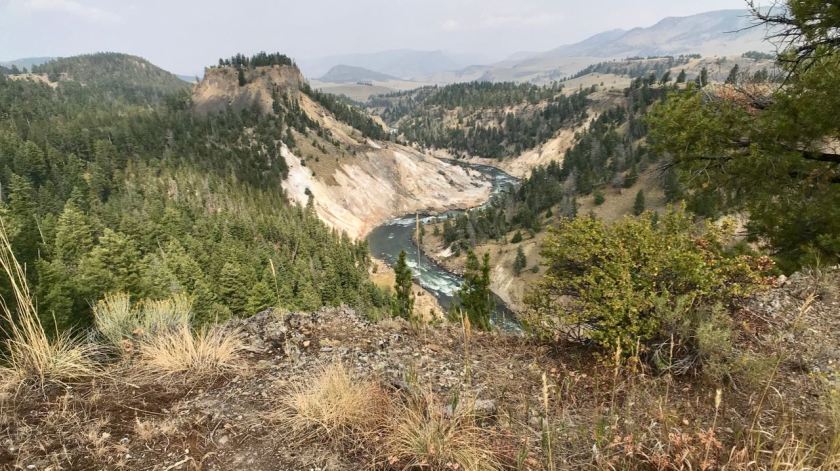 We crossed over Dunraven Pass at 8859 feet. As we descended back down we stopped to see Tower Falls… 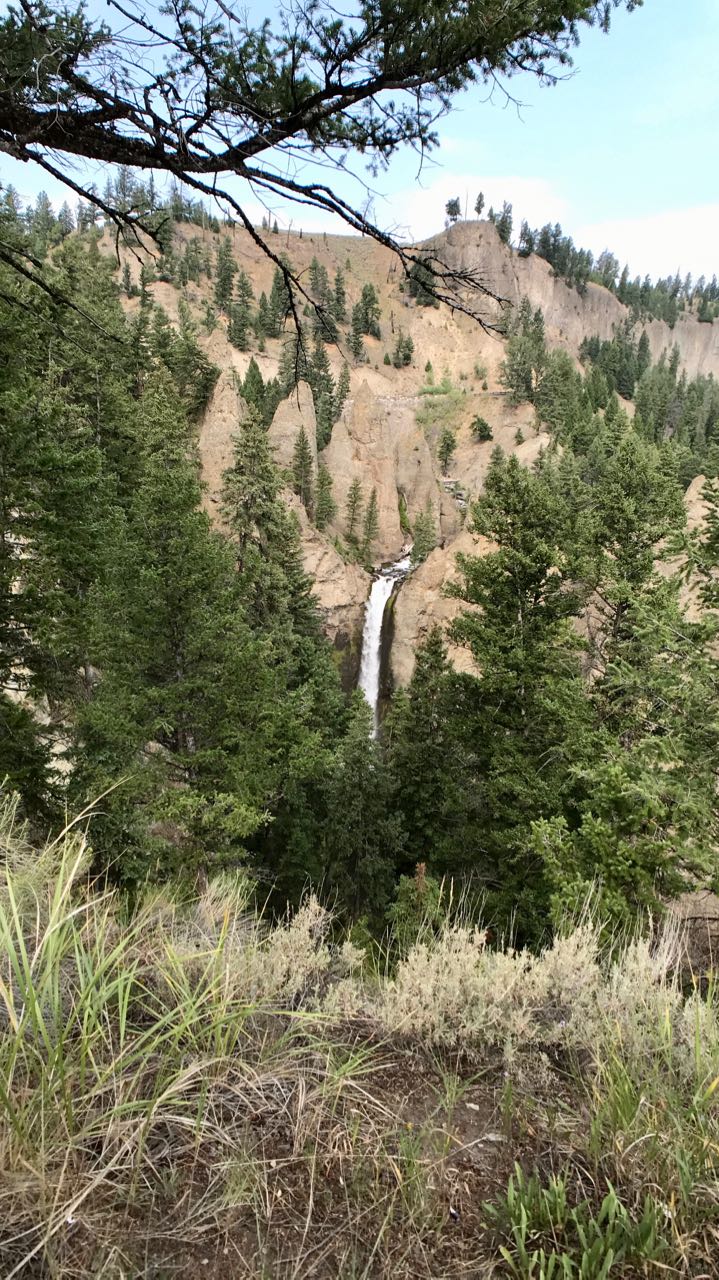 before ending up at our real destination, Mammoth Hot Springs, 6239 feet. Here we perused our third visitor’s center before heading off to walk the boardwalk.

This area was originally Fort Yellowstone, where soldiers were established to protect the park in it’s early days from poachers and squatters.

So as I’m getting tired and I’m sure you are too, so I’m going to just put some pictures of the Mammoth Springs area. There are no geysers here, but springs that gurgle up through the rock and cascade down the hillside creating travertine terraces. 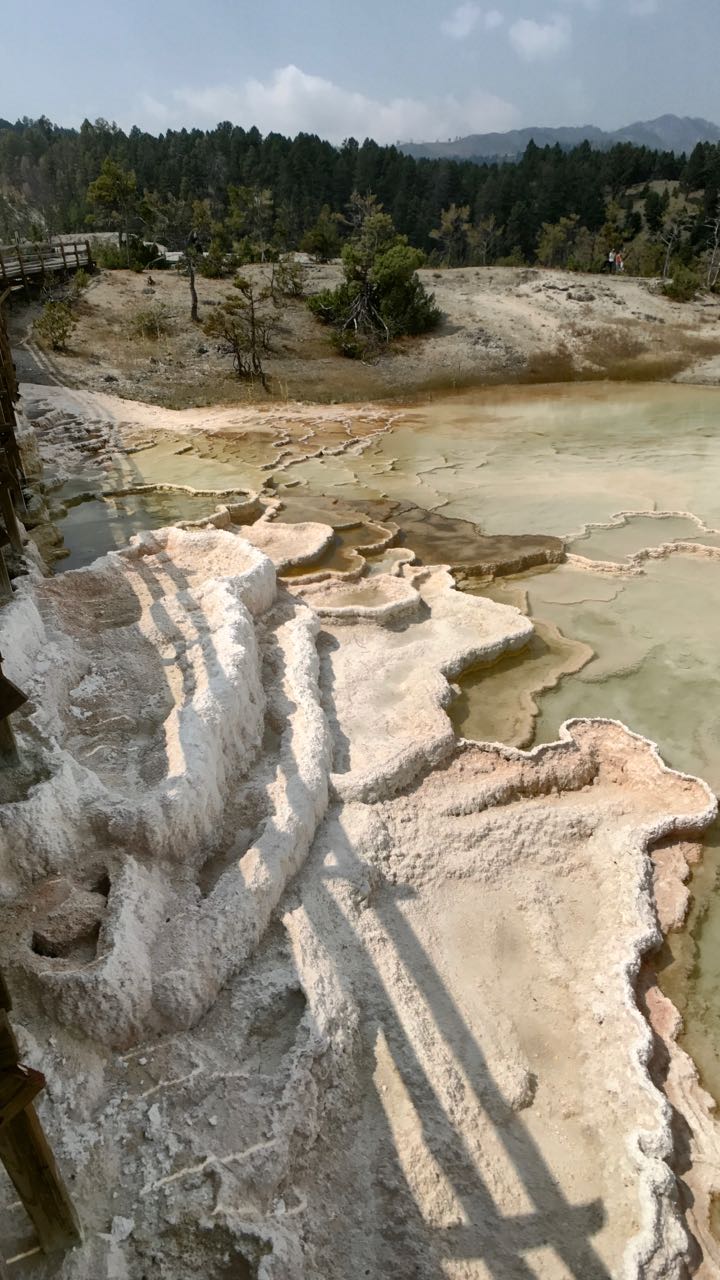 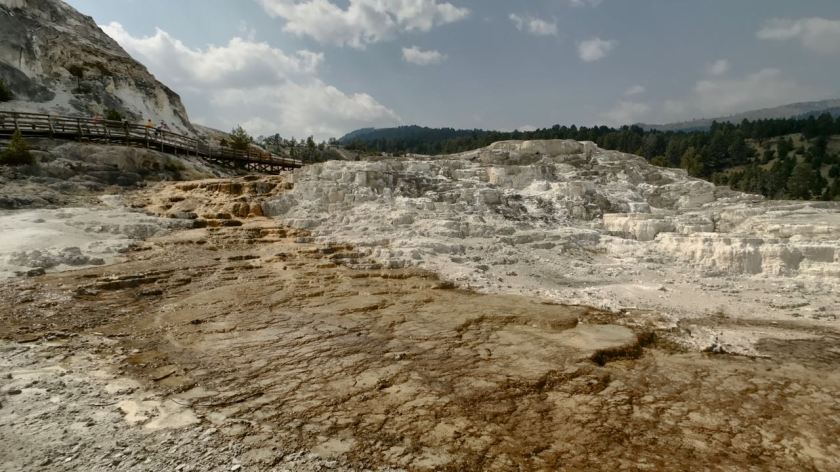 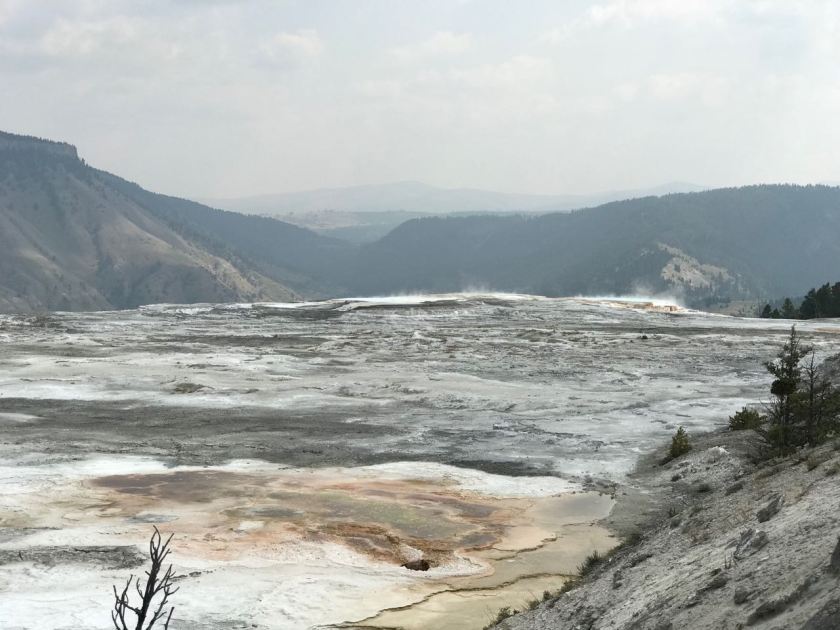 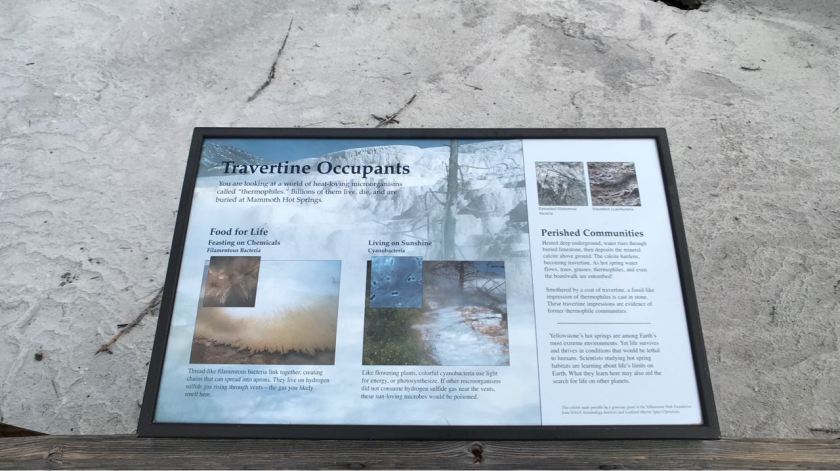 My only advice is to make sure you go all the way down the boardwalk to the viewpoint or you’ll miss this awesome view. 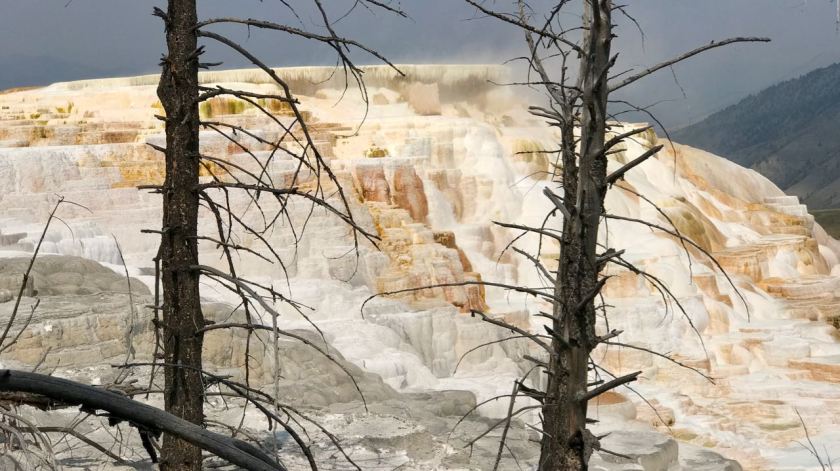 After fortifying ourselves with ice cream (do you see a theme here?) we left Mammoth. As we came around the west side of the loop to Norris we made a stop at the Museum of the National Park Ranger. It is staffed by retired rangers and was pretty interesting.

Then because we were so close we pulled into the Norton Springs area.

We didn’t walk the whole trail—it looked much like the springs we had seen before and after 74 miles so far we were tired. So we headed back toward the Hayden Valley (more bison sightings) and home. Whew what a drive!

Decided to hit the last visitor center so I could get another stamp in my book. This one, Grant Village, had some interesting information about fire in Yellowstone. On the way we stopped at West Thumb to see the thermal pools along the shores of Lake Yellowstone. We didn’t find them any more exciting than those we had already seen, but it was cool to see the one named Fishing Pot (on the right in the photo below) because fisherman used to throw their catch in it to cook. 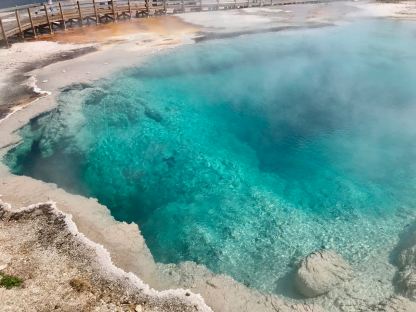 I think I may have lost a day in there somewhere because we spent a week in Yellowstone. It was just such a blur of driving and sightseeing. I have a hard time with our final impressions of the park. We found awesome views and unusual sights that no other park has shown us so far. And overall, we didn’t find Yellowstone as crowded as it’s reputation. Most mornings we headed off around 10am and only a couple of times did we have to circle to find a parking spot. Our biggest let down was the campground. I think if that had been nicer we would have enjoyed our visit here more. Still I’m glad we finally made it here. 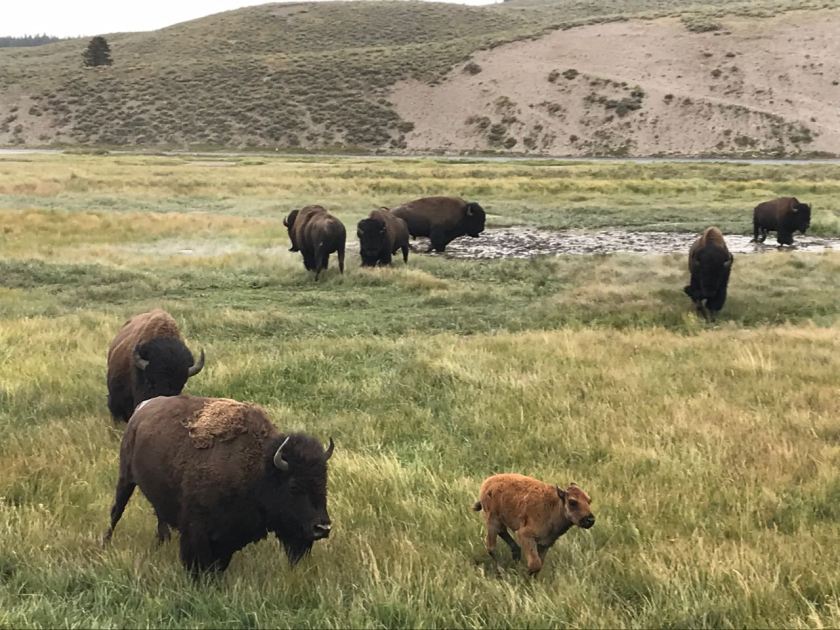 Thanks Yellowstone for being our 20th national park!

2 thoughts on “Yellowstone, The Stinkiest Park”